I was back in Paris again! This was sort of a last minute decision since my mom and aunt decided to come visit me and travel Europe. Tickets were extremely cheap with Ryanair, and I believe I got them for under 20 euros one way. They were flying in directly to Paris, so I would meet them at our hotel. It was sort of weird traveling alone, but luckily I had become more familiar with Paris after the previous visit. After showing them around Paris in the day, we settled at Chez Leon for dinner. C had told me that the one in Paris was really good and having previously tried it in Brussels, I was excited to go again! I did some Googling and realized that they had 5 different chains in Paris! We started walking towards the Les Halles/ Chatelat location, but soon realized it’s actually pretty far from where the shops are at Champs Elysees. We ended up taking a metro to Les Halles, and it was right outside the station. The restaurant was very quiet and empty on a weekend night. Service was also really lacking. There were basically no other diners, yet they took forever to come take our order. 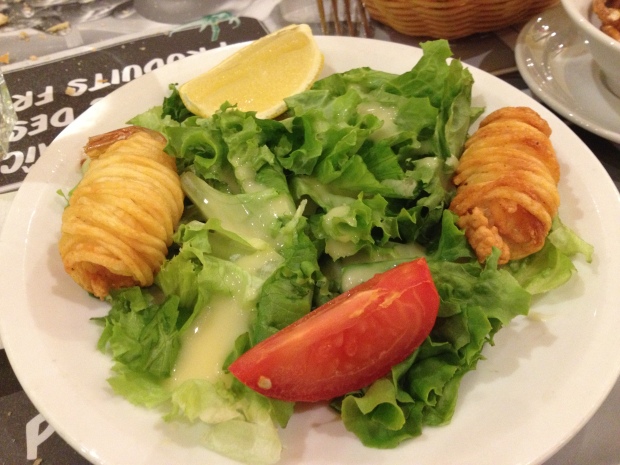 They had a set menu going on for an appetizer and an entree for a discounted price. For the appetizer, we chose the Shrimp Spring Roll Salad. It ended up being two pieces of shrimp being battered and deep fried. The shrimp were pretty big and it actually tasted pretty good despite it looking very simple. It came with a simple green salad.

For the entree, we got the Fresh Salmon Filet. It was pan fried and came with rice and green beans. Everything was lightly seasoned with salt, which we liked so it wasn’t too overwhelming. The salmon was cooked perfectly with the top lightly crispy and the fish flaking inside. 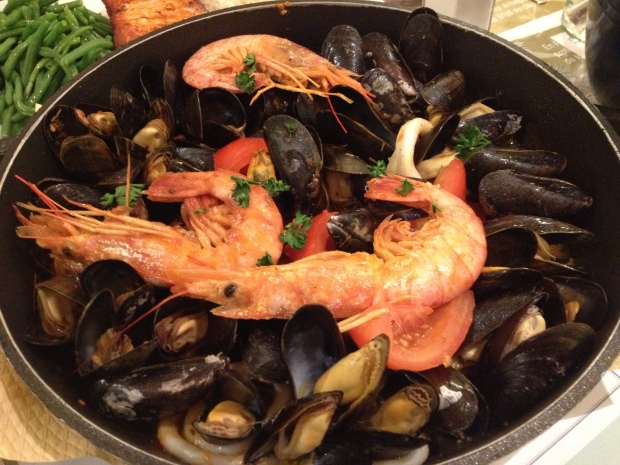 Seafood Mussels in a Plancha

And of course we got some mussels! My mom isn’t huge on creamy sauces, so we ended up choosing something different from the usual. We got the Seafood Mussels in a Plancha, which was basically a pan filled with seafood and sauteed with olive oil, tomato garlic and mixed herbs. Other than mussels, other seafood included wild king prawns and calamari rings. Although the mussels were small, they were again very fresh. The sautee style was a bit different yet quite flavourful, but I still preferred the ones steamed in white wine or a broth. Our mussels also came with fries and bread, so it was more than enough for the three of us. 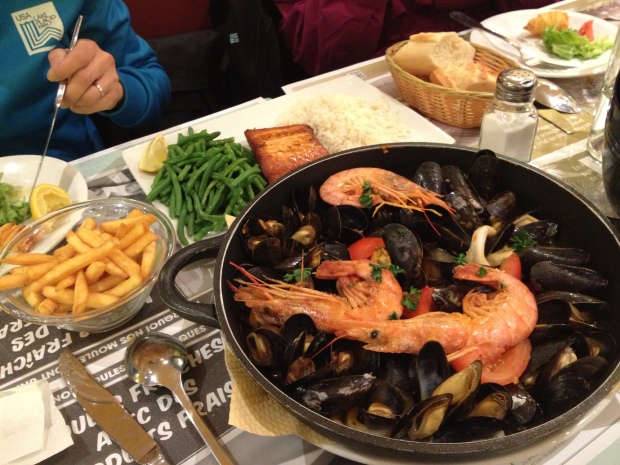 And that was our meal at Chez Leon! However, I heard that the chain at the Les Halles location is not as good as the rest. I’m not sure since I haven’t been to to the other ones, but I would agree that service was lacking. It wasn’t rude or anything, but weren’t really looked after. Next time, I will be visiting the other locations! Never a disappointment for moules et frites at Chez Leon!