The Spanish Steps is another tourist spot that you should visit when in Rome. Just across the steps, you will find tons of luxury stores but also more affordable brands further down. The Rick Steve’s book had suggested Il Gabriello, but my mom had thought it would be too expensive. Minutes after persuading her, we finally ask for a seat and were told there are none. So apparently, you’re supposed to make reservations here! We ended up making a reservation for the next night, and it was the best idea ever! Atmosphere is lovely, and service was great! The restaurant is underground so it’s pretty cozy. A huge variety of wines here too, but they didn’t even give us any attitude when we just asked for water.

If I remember correctly, the bread was complimentary, which was a bit surprising, since many places we had gone charged us for extras. Water, however was charged since they don’t give out tap water. The assortment of bread was really good though! The loaf was alright, but the little buns were so soft! The bread sticks were also really nice! 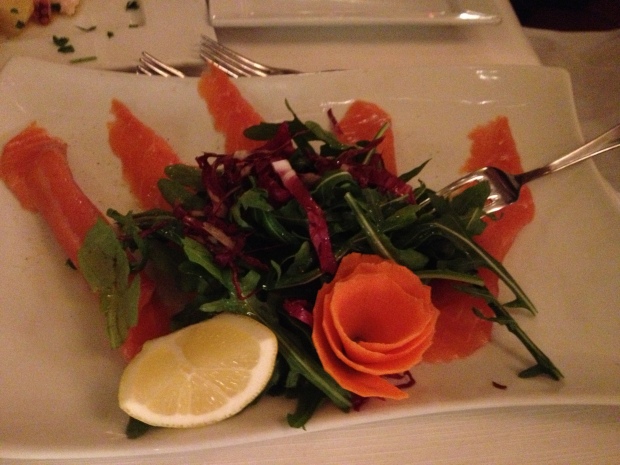 The Smoked Salmon Salad was so good! The salmon was really fresh and mixed with the greens, it was a nice way to start the meal. Really refreshing and light!

This is a must order for octopus lovers! At first, I was worried the octopus would be tough, but it was so soft, yet still had a nice chew! It came with some potatoes and a nice light dressing. Absolutely delicious!

K got the Lobster Linguine which was a simple tomato based linguine and came with a large portion of lobster. Very fresh, and the linguine was cooked perfectly to al dente. Keep in mind that we had also ordered the primi sizes, which are supposedly smaller.

E got the Mushroom Risotto, which he said was also really good. It looked really creamy!

C got what I believe is the Seafood Paccheri. Paccheri are large tubular pasta. Again, it came with a nice tomato sauce, and came with a variety of prawns, shrimps, and a lobster claw.

For myself, I didn’t go for the pasta but opted for the Grilled Lamb Chops. I sort of wish I had gotten the pasta after trying the others. Still, the lamb chops were pretty good. They were simple, and the sauce wasn’t overwhelming so you could get the true taste of the lamb.

A got the Seabass, and she was surprised to see it come as a whole. I guess we aren’t familiar with seeing fish as a whole in Vancouver, other than in Asian cuisine. No worries though, since A loves her fish and enjoys eating a whole fish. It came with a tomato sauce on the side which also had clams in it I think. She said the fish was very fresh and grilled nicely.

For dessert, we had the Pistachio Hazelnut Crepe, which I found a bit pricey for the portion. It was quite delicious though, with tons of Nutella filling and pistachio nuts on the top.

After, we headed to see the Pantheon, and also stopped by Il Gelato di San Crispino, which is known to be one of the best gelato shops in Rome. 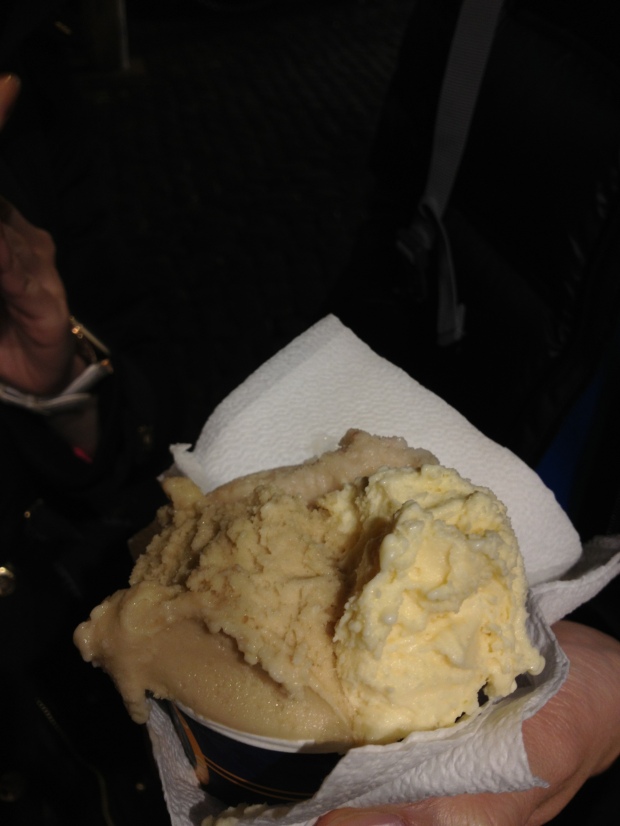 They have really unique flavours here. Made from fresh fruits or the actual ingredients. Here, we got the double scoop of Pear and Chestnut. Pear was my favourite as it was sort of like a sorbet. Very strong in pear flavour too! We also had the Chestnut which K really liked, but I thought it was only average. Overall, really cool place to try out some flavours you might not find elsewhere. The quality of the gelato was also really good.