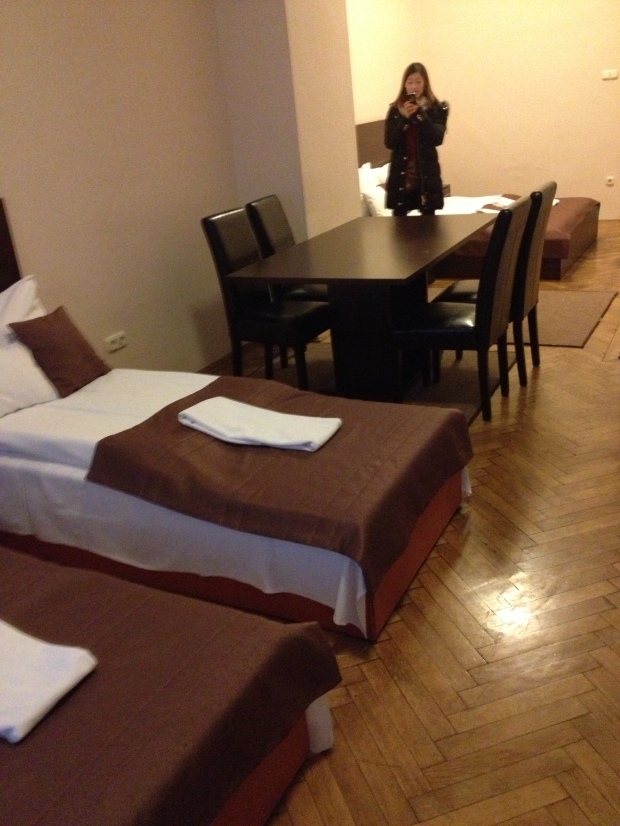 Little did I know, I would be heading to Budapest within a month again! The rest of them wanted to check it out, so I was basically their tour guide this time. We stayed at All-4U again, but I later realized that they actually own a bunch of different apartments. For this trip, we stayed at a different apartment which was only a few minutes walk away. This one was huge! It could fit 6 people comfortably on the beds. 2 queen sizes and 2 twins. A kitchen, enormous bathroom, and just tons of space everywhere to walk around or even dance. Highly recommend the apartments from All-4U. For this post, I’m not going to go into the details of some of the places I already visited on the past trip. I’ll focus more on some new activities we did, and you are welcome to read about my previous visit here: 1/2 Day Trip in Budapest

Once we settled down, K, E, and I went to Budapest Ice Rink at the City Park. It’s the largest outdoor skating rink in Europe! In the summer, it’s a lake, but is transformed into a skate rink for the winter. Admission for skating is HUF1200 on weekdays and HUF1400 on weekends, allowing you a full of skating. However, skate rentals are charged by hour, so unless you brought your skates over, you’re likely to need to purchase these. We skated for an hour and had plenty of fun. People here are also pretty good skaters, so you won’t be finding those pulley chairs around to learn how to skate. Your admission also includes use of lockers, and they have a really cool tech system for the lockers. No keys, just a tap of your card and your locker will open. Pretty cool!

You’ll find the iconic Budapest signage on the rink as well as some hot food and drinks on the side of the rink. In the back, you will see the Vajdahunyad Castle, so you get some pretty impressive scenery while you skate. 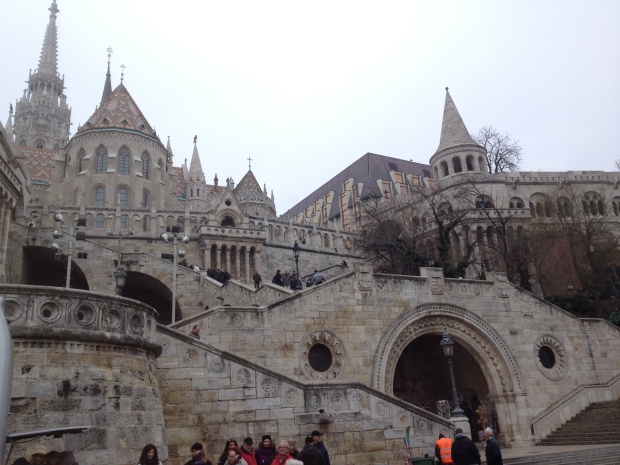 The next day, we went to Matthias Church, and you could really see the details in the daylight. The previous time I went, it was dark, so difficult to see architecture details. However, I find it much more beautiful at night, since it gives you that castle-like feel. 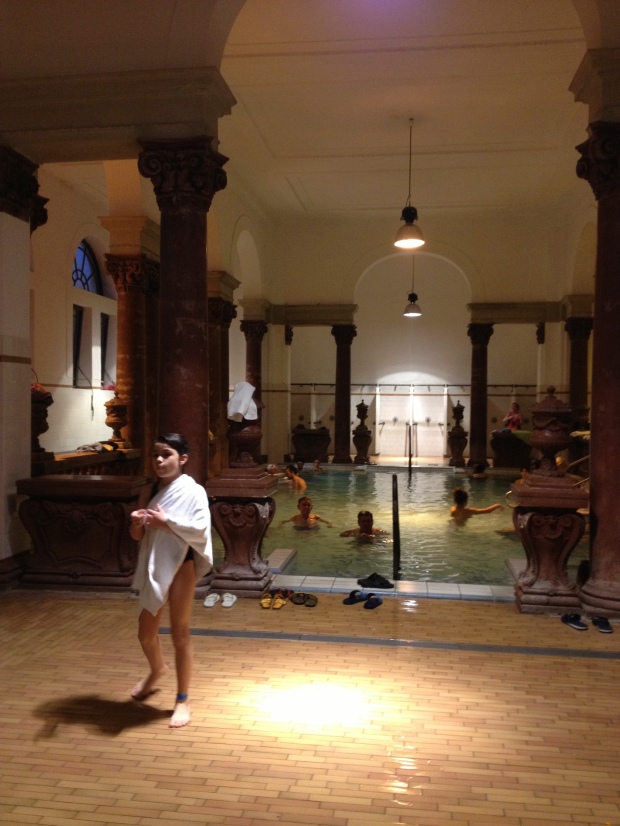 Early evening, E, K and I went to the Szechenyi Medicinal Bath, which is the largest medicinal bath in Europe! It’s found just inside the City Park, and is a unisex bath. You wear swimsuits here, so it’s not like the ones in Japan. They also have really cool technology again, with wristbands that give you access to your lockers, and you can even check which locker number you used by beeping it on a machine. It’s also waterproof! Anyways, there are a variety of indoor pools with varying temperatures. Apparently, you’re supposed to go into a cold bath, then jump into the warmer ones. Yea, I dipped my legs in the cold one and already came back out… Too cold!

The interior design is really cool though! It has a Neo-baroque style and was built back in 1881 when it was an Artesian Bath. There are around 12 indoor thermal baths, with 3 outdoor ones. One of the outdoor pools is actually a swimming pool and requires swimming caps. 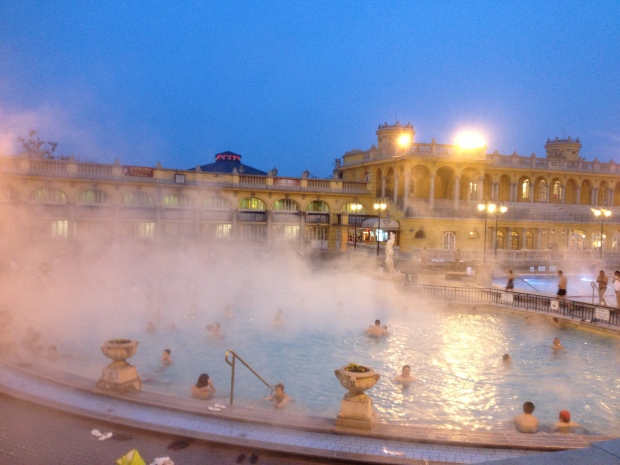 This is the outdoor thermal pool, which we spent most of our time at. It was so relaxing. It’s like freezing cold outside (probably at 0 degrees) and we’re in a bath at around 32 degrees. That cold and hot feeling is so good! Even when you have half your body up, you don’t feel cold. You’ll find men playing chess on the side, which we found funny, but also many other tourists who have found their way here. The beautiful yellow building makes you feel like a royalty here. Also, one of the pools has a spinning tidal pressure concept, which pushes you around in a circle. It’s pretty fun! There are also many massaging beams around the sides as well as sculptures spitting out water. Super cool! 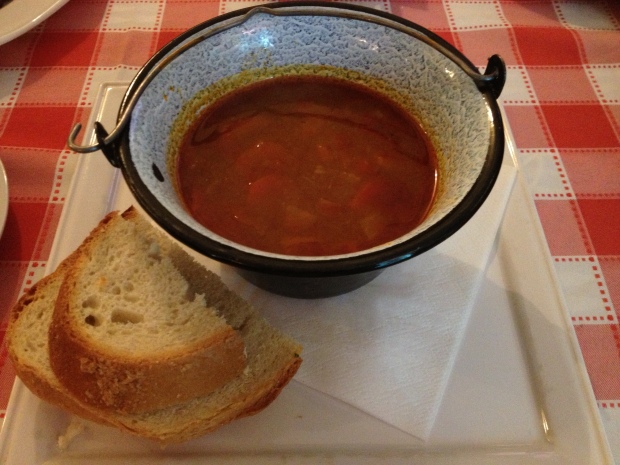 For food, we didn’t eat much at restaurants, since there were so many Christmas markets with food around. We pretty much stuffed ourselves full from that. Unfortunately, I didn’t take pictures of those. It was freezing cold and I just wanted to eat! One of our last nights, we ate in the tourist area of Vorosmarty Square. The reatuarant was called Planet Cafe and I advise everyone to STAY AWAY. 100% tourist trap. I only have this picture of Goulash, but it is much smaller than what the menu showed. Okay, fine.  A lot of places do this type of false advertising. But what happened was immediately after we placed our orders, I peeked into the kitchen and saw three microwaves spinning. They were reheating our food. Also, we ordered a Steak dish, which on the menu showed fries. When our bill came, we saw they had added another HUF400 and we were told they were for the fries. We never even asked for them! Seriously? Okay, that’s fine too since it wasn’t a lot. The other issue was the 15% service charge automatically added on when we had no service. This place is just a complete scam. The food wasn’t inedible, but they were just microwaved and we just felt completely scammed. Avoid at all cost!

Looking forward to enjoying happy hour @joefortesvan again once things go back to normal 🍻 #happyhour #lobsterroll #shrimproll #beer #joefortes
Finally tried @chimecvan’s fried chicken and onion rings 🍗🧅 Crispy and juicy! Plus we found an extra piece to our 5 piece order! 🤭 #chimecvan #friedchicken #onionrings #takeoutchallenge
Wish I was back in Taiwan for all the delicious food! Guess this will do for now 😙 #jianghu #taiwanesefood #jianghutaiwanesepotandwokcuisine
Been so behind with my posts 😞 Throwback to the time @askforluigi 🍝 Always enjoy the dishes! #askforluigi #friedcauliflower #beeftartare #pasta