Just across Coquitlam Centre is Legend House, a restaurant that specializes in Northern China and Szechuan cuisine.

Walking in, you can see the chefs preparing handmade noodles and dumplings.

We started off with the Chicken with Spicy Sauce. The free range chicken was tossed in a spicy Szechuan peppercorn dressing & garlic. I found the sauce to be very spicy, but I’ve had a spicier one. I’m sure Szechuan diners would think that this is not spicy enough. The chicken itself was also difficult to eat, since the chicken was chopped up in a way were there were bits of bones everywhere. Not a lot of actual meat to be honest.

Next were the Dan Dan Noodles, which came in a huge bowl for a cheap price of $6.95. Eating this on your own would definitely fill you up very well. The noodles were handmade, but I found that they stuck together a lot. The texture itself is pretty good though, with a nice chew. The sauce was a spicy, tangy peanut sauce, and included minced pork & spinach. Of course, there were crushed peanuts as well. Slightly spicy, but I could still handle it.

Next up were the Shanghai “Xiao Long Bao” Soup Dumplings, which were filled with minced pork and ginger. The soup inside was sizzling and creamy. The skin was also a good thickness. Pretty good and comparable to some of the ones in Richmond.

We also got the Legend Beef Rolls, which were ginormous! The five spiced beef were rolled in a crispy green onion flat bread and filled with sweet hoisin sauce. We thought the outside was pretty burnt, but the roll itself was pretty good, with a good amount of filling. I found it difficult to eat since it was such a big roll though. 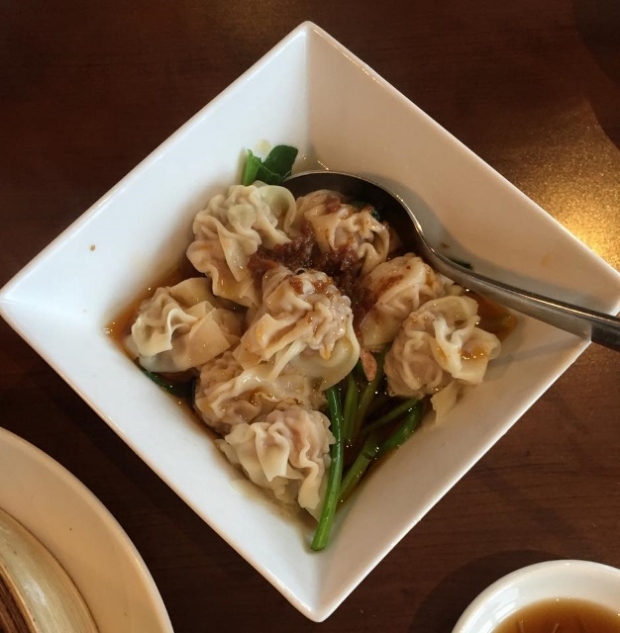 Last but not least, we got the Szechuan Hot Chili Dumplings, which were filled with pork filling and tossed in chilli oil, garlic, vinegar & spinach. These were actually not very spicy, and we found it too oily. It was literally just dumplings in chili oil.
Overall, Legend House was decent, but not memorable. Service is actually pretty good here and the ambiance is much nicer than many Chinese restaurants. Very reasonable prices and there’s free underground parking. I guess this would be a good choice for Shanghai/ Szechuan food in Coquitlam.

Pros:
– Ambiance and service is pretty good for a Chinese restaurant
– Reasonable prices for decent eats

Cons:
– Some hits and misses for dishes, but overall not very memorable