Fish Shack is part of the Glowbal Group of restaurants. It is one of their more casual restaurants and is located conveniently on Granville Street. We decided to go for happy hour, which is between 2:30 and 5:30 pm. They have a small patio, but it was already filled since it was a sunny day. We ended up sitting indoors.

The interior is modern with red, black, and brown as their colour theme. They have a huge chalkboard listing the different types of fish, which was pretty cool.

Captain Jack’s Lemonade
During Happy Hour, there are select drinks for $5. Everyone at my table decided to go for the featured cocktail, which was Captain Jack’s Lemonade. This had Jack Daniel’s whiskey, triple sec, fresh lemon juice, and syrup. It was actually very sweet and tasty. You could barely taste the alcohol.

For myself, I had the Red Truck Lager, which was 20 oz. I later realized that their draught beers are usually around $6 for a 20 oz anyways, so I didn’t think it was that great of a deal. A 10 oz is roughly $4, so the restaurant is an affordable place to grab a drink.

I wanted to try Fish Shack’s Happy Hour because they have oyster specials. During Happy Hour, their specials include their featured oysters, sawmill bay, kusshi, and okeover. All are 50% off their regular price. The Kusshi Oysters after discount were roughly $1.50, so a pretty good deal, since they are usually on the pricier side or not featured during happy hour. They were small, but quite fresh and sweet. I probably only had one that had a bit of shell in it, so the shucking was done quite well.

They also provide a variety of sauces for the oysters. Their are your traditional mignonette with shallots and cocktail sauces. Then there was one that was a spicy thicker sauce. It gave a kick, but not too overpowering. The last sauce, I couldn’t really figure it out. It wasn’t that good though.

During Happy Hour, they also feature a list of items which are 50% off their regular price. We shared the Salmon and Crab Cakes, which came with a chipotle tartar sauce. You don’t usually find the cakes mixed with both salmon and crab, so I found this to be a nice change. However, I don’t think it was executed too well. There could have been more seasoning, the meat seemed to be overcooked.

S got his favourite Fish and Chips, which featured battered ling cod, fries, tartar sauce, lemon & a coleslaw. This was a pretty good deal, at a little more than $5 after the discount. However, I thought the batter was fried to a really dark golden brown. Seemed like the oil being used was old… 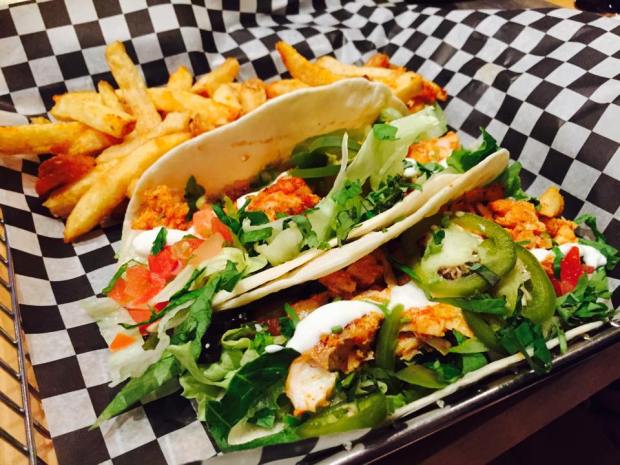 For myself, I got the Creole Fish Tacos. The flour tortillas were filled with battered fish, avocado, lime, sour cream & fried onions. An order comes with two tacos and fries. This came to around $6 after discount. I found these to be quite sloppily made. The fish were also bits of fish, rather than a whole piece of fish being fried. Felt like this might’ve been scraps of leftover fish… I guess it’s okay for the price, but I wouldn’t pay full price for it.

Lastly, we also shared the Popcorn Shrimp, which comes with a house-made cocktail sauce. The batter on these shrimp were not crispy, but rather soggy. I felt like I could get better ones at the supermarket where you baked them yourself…

Overall, I was quite disappointed with the food at The Fish Shack based on the items we tried at Happy Hour. The oysters and drinks however were quite a good value and the oysters were fresh. Service was also quite poor. The server didn’t seem too friendly and it was really difficult to get their attention when we needed service.

Cons:
– Food we tried at Happy Hour was pretty bad
– Service was poor and unfriendly