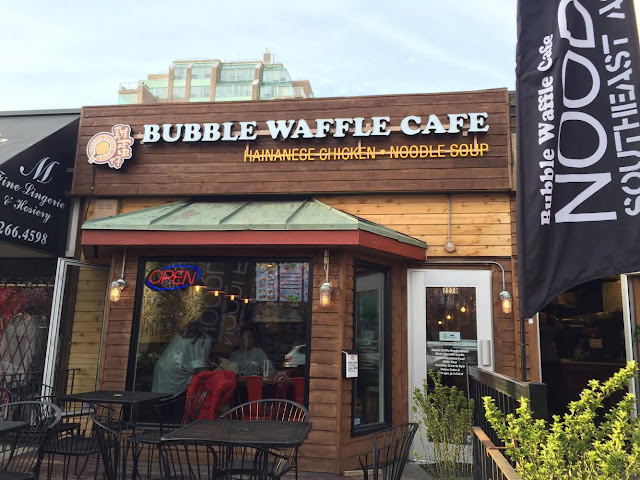 NOTE: All food and beverages were complimentary, but all opinions are my own.

Bubble Waffle opened a sit-in location in Kerrisdale and ChineseBites invited us to a media tasting. 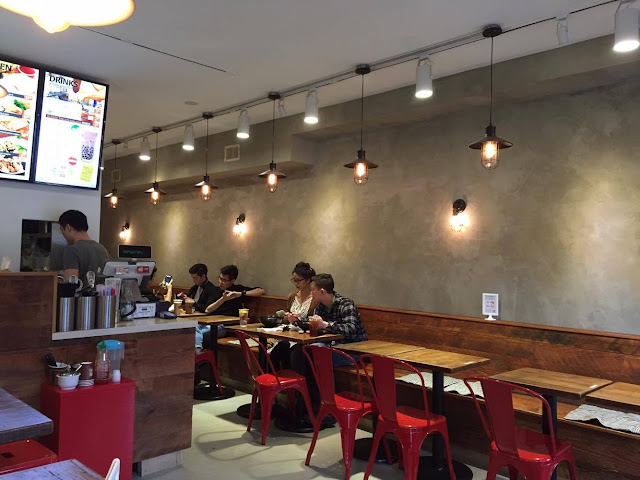 The interior is rustic and the owner said he wanted to give a HK style feel to it. The prices here are a little higher than the food court stalls, but they are still affordable. 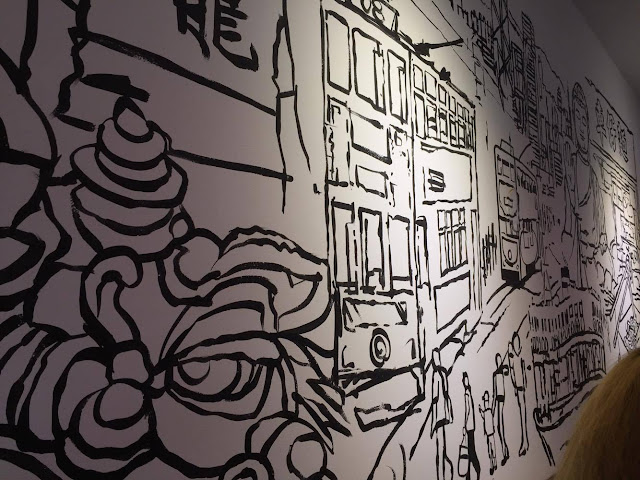 They even have a mural painted on the wall showcasing Hong Kong. 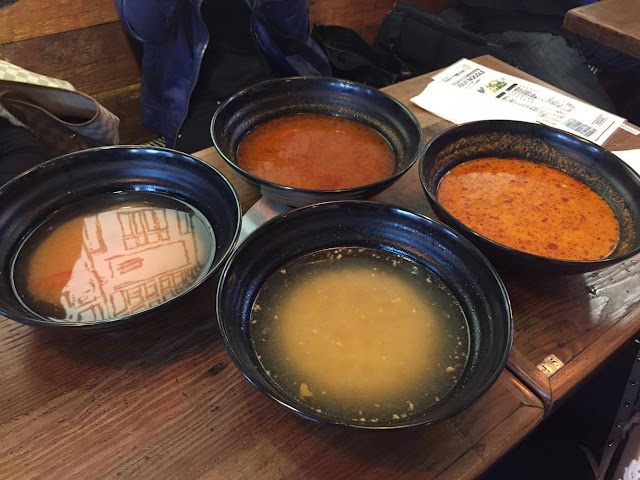 I sat with Instagrammers, Tina, Sharon, and Elaine. First up, we got to sample all the different soup bases. This was great since there are a few soups that I wouldn’t normally order, like the really spicy ones. 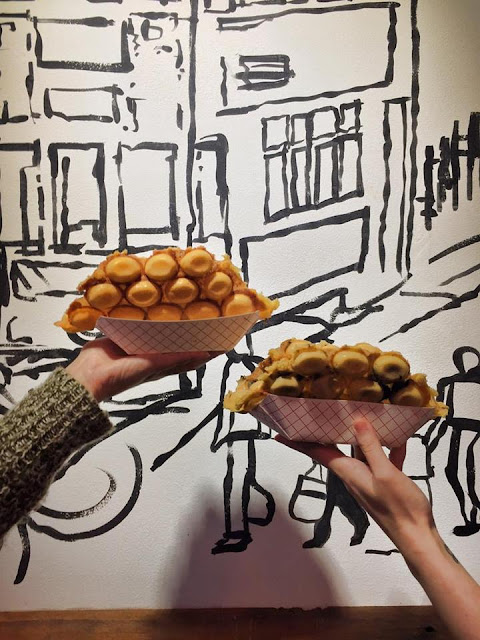 We then got to sample a selection of their Bubble Waffles. 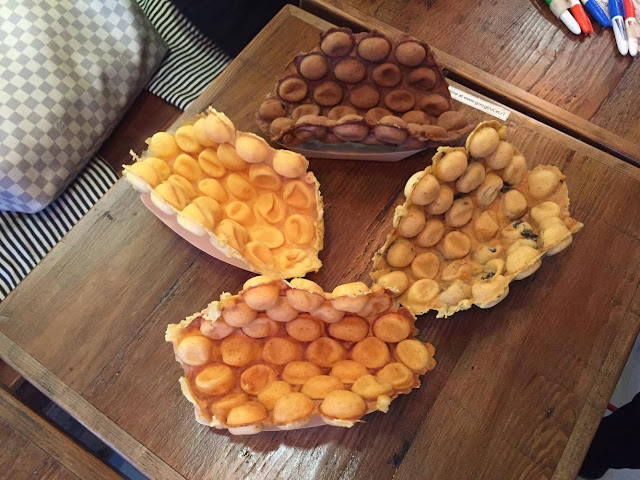 They have a variety of flavours here, including original, chocolate, Oreo, cheesecake, matcha and cinnamon. These were okay, but not crispy enough. 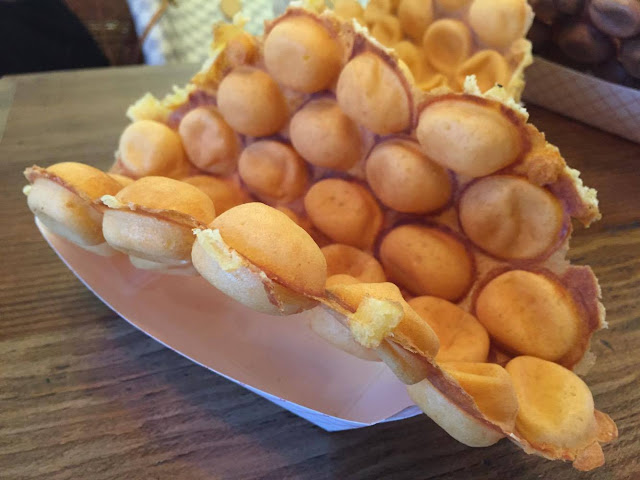 My favourite was still the original although I found the cheesecake flavour surprisingly quite good. The cinnamon flavour was probably my least favourite. 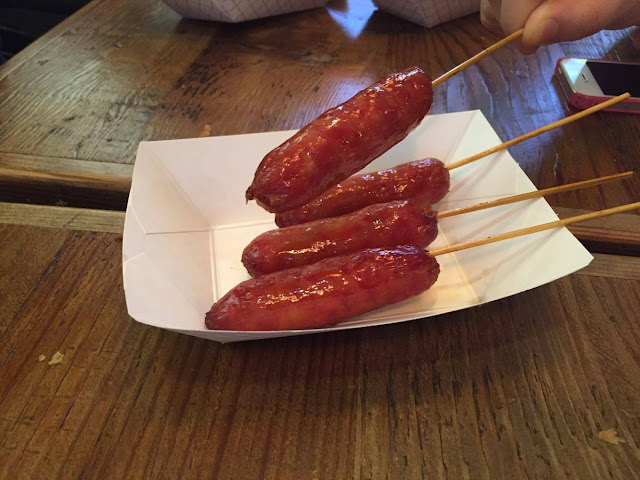 Next up were some Taiwanese snacks. The Taiwanese Sausages were quite a hit at our table. They are a mix of sweet and savoury and have a firm texture. 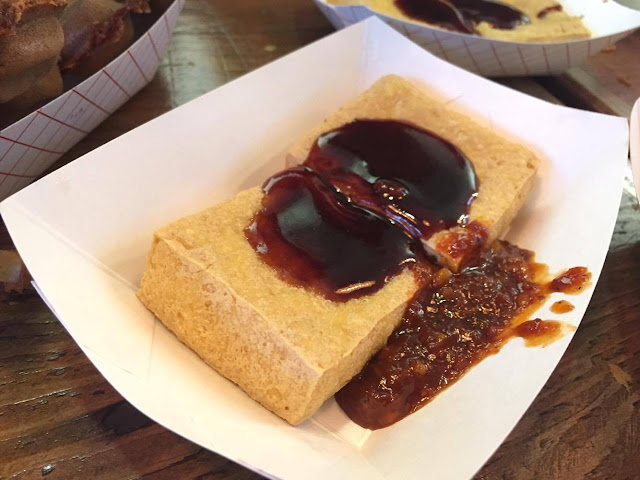 My favourite snack was the Deep Fried Stinky Tofu. The outside was very crispy and the inside was piping hot. Along with the sweet and spicy sauce, this was delicious. A miss for some because of the fermented smell. 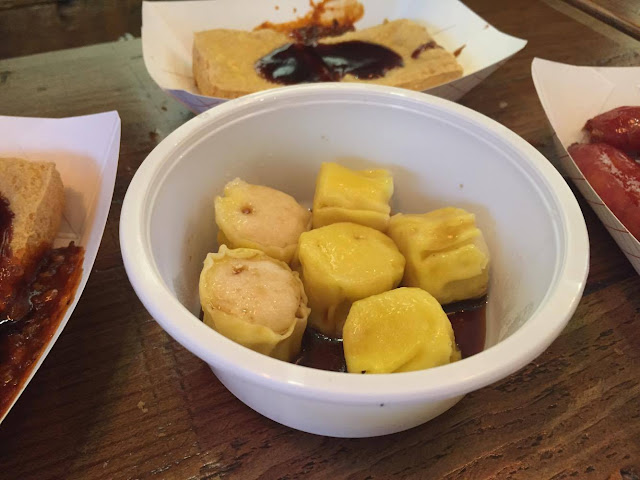 The Fish Siu Mai was quite typical and I found that it was soaked in too much soy sauce. I kind of wished it had a chili sauce on the side. 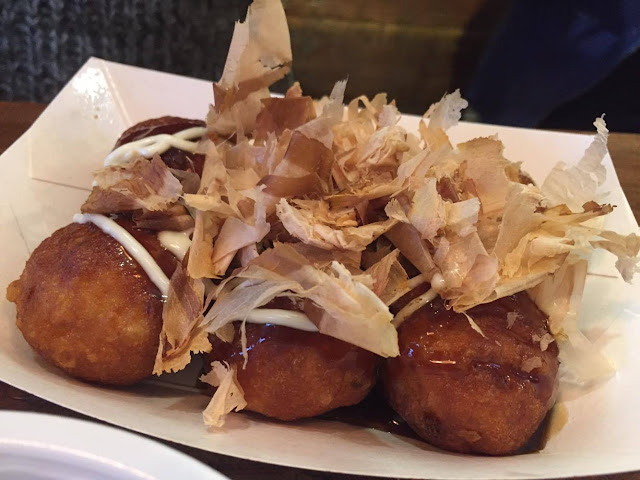 I enjoyed the Takoyaki quite a lot as these were filled with a generous amount of octopus bits and the inside wasn’t doughy like some I’ve tried. 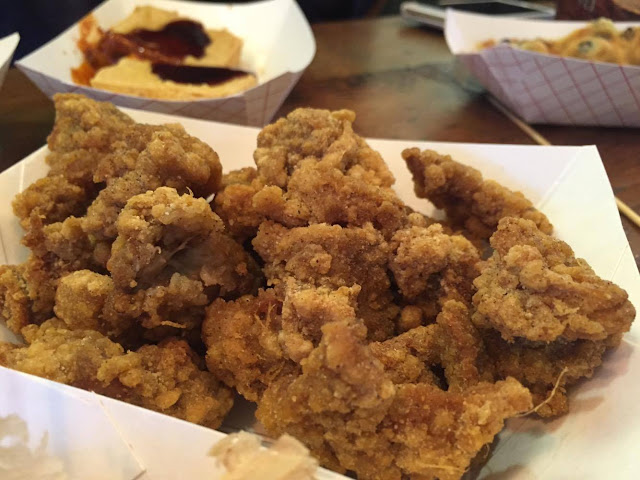 The Taiwanese Chicken Nuggets were a hit as they were crispy with the chicken itself very moist. I loved the salt and pepper flavouring. 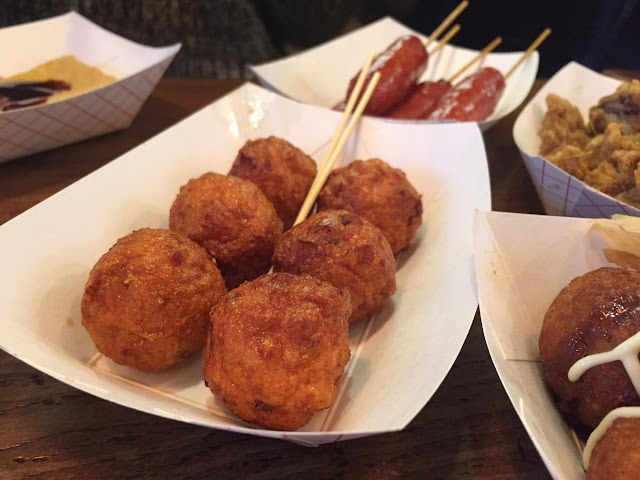 The Fried Shrimp Balls were a beautiful orange colour but I found them to be slightly bland. It needed a sauce to go with it. 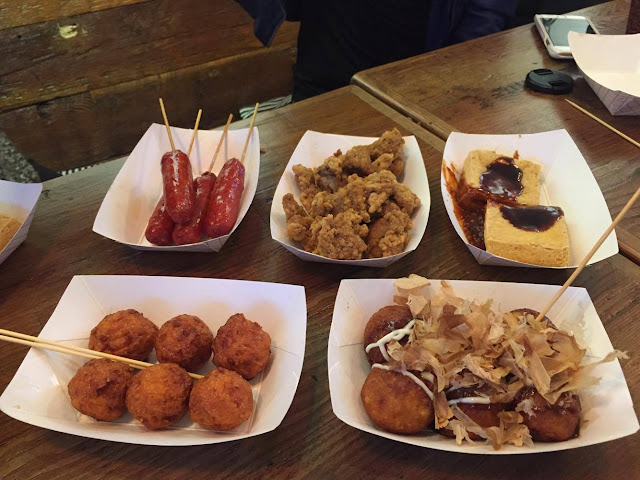 Overall, Bubble Waffle Cafe has a great variety of snacks which you can order on its own or pay extra to add on as a side with your noodles. 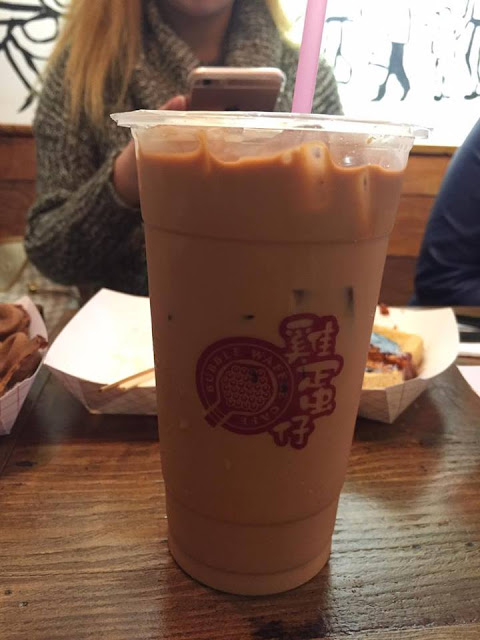 The drinks came along and I got the HK Style Iced Milk Tea. Their milk teas are actually made with a blend of 5 different Sri Lankan teas. The tea also goes through a filter and is pulled, a common way of making milk teas in Hong Kong. Very silky smooth as a result. 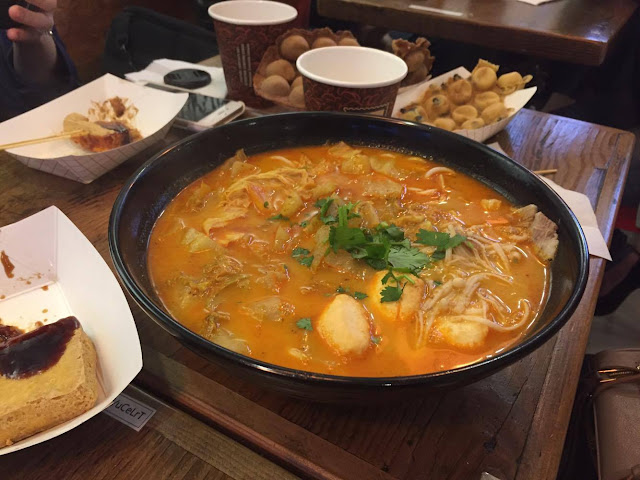 Finally our noodles which we got to customize arrived! E got the Laksa soup base which is one of my usual orders. The soup is flavourful without being too spicy. 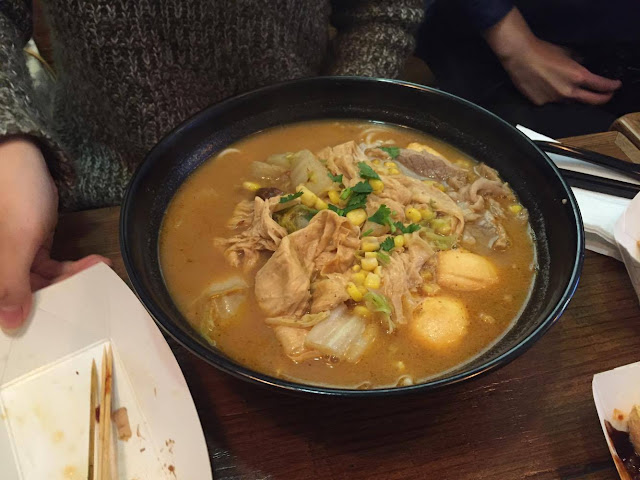 T got the Satay soup base which again is very flavourful. It almost tastes like you’re having hot pot! 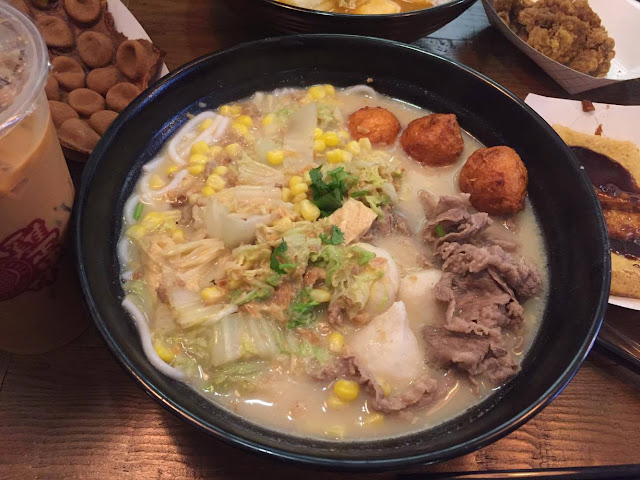 For myself, I chose the Chiu Chow Style Minced Pork Fish Soup along with rice noodle, sliced beef, sliced beef brisket, fried shrimp ball and fish ball with shrimp. All noodles come with cabbage and bean curd. For some reason, my soup also came with corn. 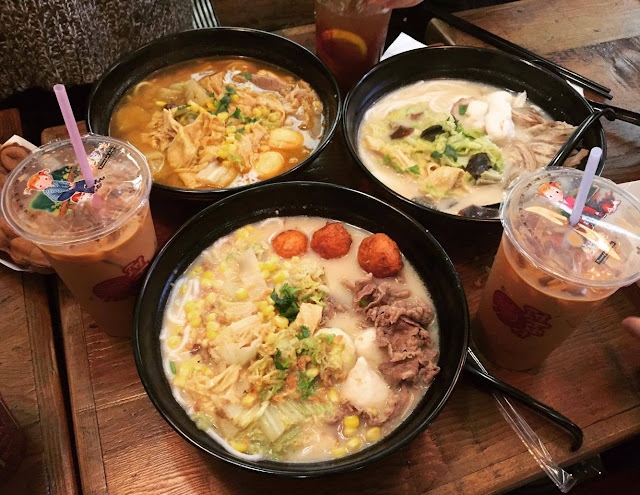 Overall, Bubble Waffle is great when you’re craving hot noodles in soup on a rainy day. I also love the ability to customize everything from the soup to the toppings. You’ll be very full by the end of your meal for sure with the large portion sizes and affordable prices. A nice option to be able to eat at a location with a nicer ambiance compared to the food court now.