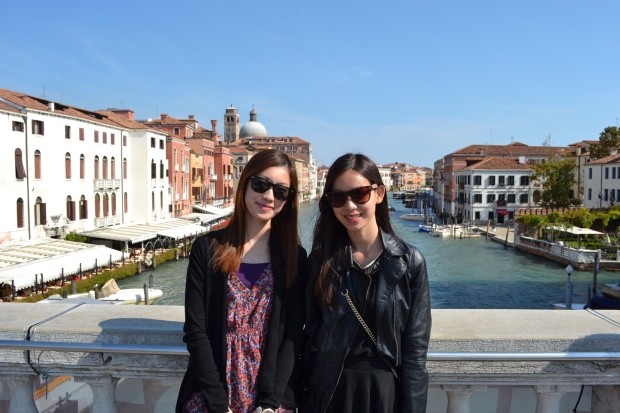 City of water…If you guessed Venice, you’re correct! I don’t normally post pictures of myself, but I took so many pictures while traveling, I might as well share some of the scenery with you all! During our stay in Milan, we actually took a day trip to Venice by train. The train was pretty fast and we were there in less than 2 hours. Maybe even less! We decided on a one day trip, since we found that the hotels in Venice were extremely expensive! We basically had half the day to explore and hoped it would be enough. If you’re planning to go to Venice, I can assure you that a day trip is enough. The city is beautiful, but it’s honestly quite small. If you want to really take it slow, then a maximum of two days will give you enough time to literally explore the whole city. First off, we hadn’t done any research of this place. We were hoping there would be a tourist center where we could get some maps and such. Yea, there was a tourist booth, but all the maps cost money! We ended up wandering without a map and actually hit all the tourist spots! So no need to really buy a map…To be honest, I found Venice one of the most touristy cities I visited. I felt like everyone around me was a tourist, and I couldn’t really figure out if locals even lived here (well, of course they do). Plus, be warned that everything is expensive! They really know how to get the most out of us tourists… 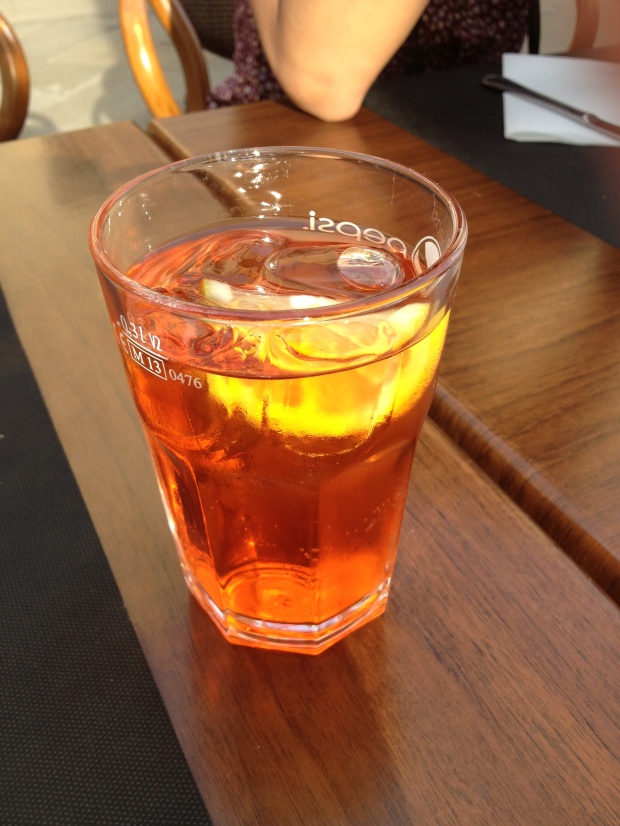 So we were warned ahead of time that food would be expensive, so we tried to settle at average looking cafes and restaurants. After exploring the city, we decided we would grab an early dinner since we would be on the train around dinner time. We walked back towards where we arrived by train as we remembered there were a line up of restaurants. At this point, it didn’t even matter if they were tourist traps – honestly the city was catered to tourists. During our exploration, we realized everyone was drinking this orange drink in a glass. They often came in a wine glass, and my sister insisted that we had to try this. According to her, it must be the drink all the locals drink here… Alright, after doing some research on it, I can tell you that it’s so popular here because the Spritz Veneziano is actually originated in Venice! A-ha. Anyways, it is a drink prepared with prosecco wine, which is an Italian white sparkling wine. It is then combined with a dash of a bitter liqueur such as Aperol, Campari, or in Venice, Select. It is then topped off with sparkling mineral water. Sometimes it is also garnished with a slice of orange or olive. Sadly, all three of us hated this drink. I guess it was the bitter liqueur that they used, that really turned us off. Even worse, was this drink cost a lot, and the three of us had each ordered one. Just when we thought it would be a delicious, fruity cocktail… 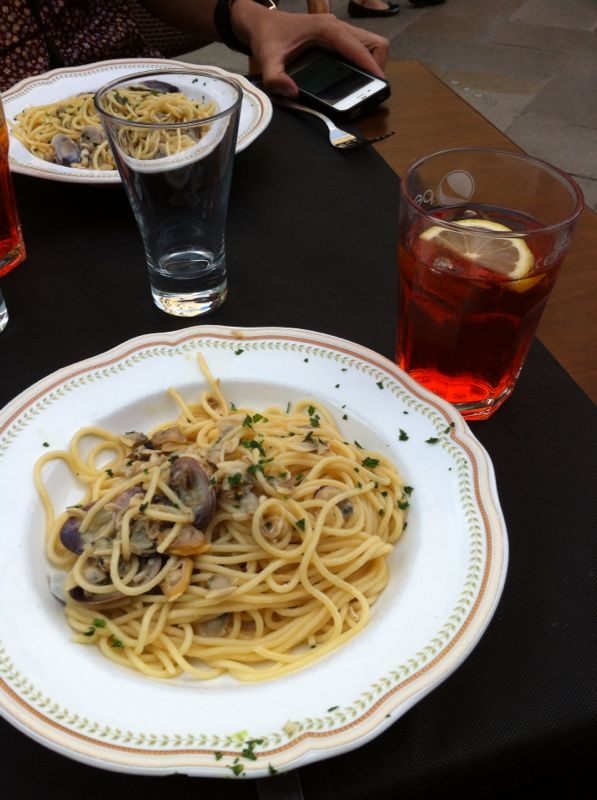 Spaghetti with Clams in a White Wine Sauce

We had settled at this restaurant that had what was called a “tourist menu”. Now most of the restaurants in Venice basically have this. They also have something called a cover charge. Cover charge is essentially a charge per person for just sitting outside. Actually, I’m not sure if you need to pay a charge just for sitting. But we sat outside, and this was added to our bill. Not to mention that service was just terrible. And they expect you to tip here… Service like that really does not deserve any tip. Anyways, K and my sister order the tourist menu. If I remember correctly, it came with a salad, pasta and another dish, which I wish I could remember. This was their pasta dish which was Spaghetti with Clams in a White Wine Sauce. This was actually pretty good! It had a lot of clams and the pasta was cooked to al dente. 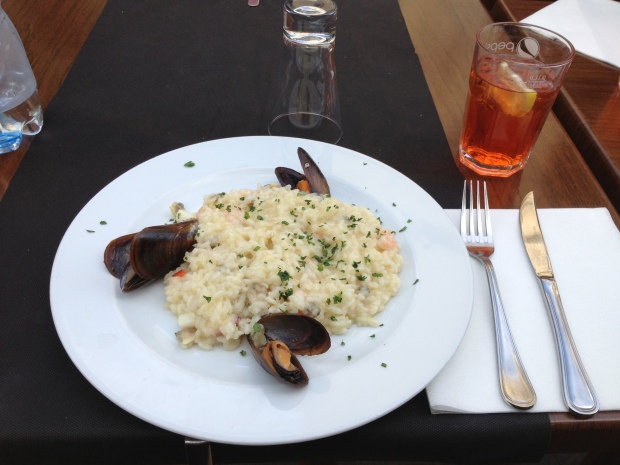 For myself, I ordered the Seafood Risotto, which was off the regular menu. I absolutely loved this. It was a bit pricey, but I think it was still under 20 euros. It was really good though! The rice was cooked to perfection, not too chewy and not too soft. The sauce was amazing. There were bits of clams and shrimps inside and it came with three more mussels. The seafood was surprisingly quite fresh. Not the freshest I’ve had, but quite decent! Loved this dish.

And now let me show you some of the shops around the city! Venice is basically filled with narrow streets which are really pedestrian walking only. Every once in a while, you would see the canal, and then you would enter just a street with buildings on both sides. It’s almost like a maze. Along these streets, you will find shops from bakeries, to pasta shops to mask shops and etc. It’s extremely popular to see these shops that sell almond cookies and these gigantic meringues. If you’ve been to Macau in Asia, my friends told me that is what Venice really reminds them of. 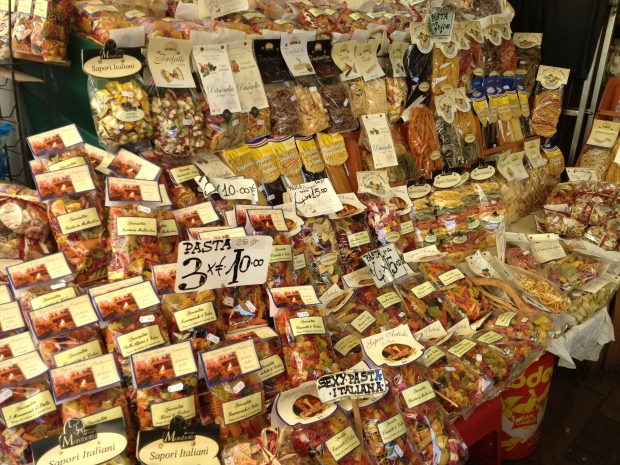 There are also tons of pasta shops! Well Italy is famous for pasta, so it’s no surprise. They claim they are handmade, and I was just drawn into their colours and detailed patterns. I love how they are shaped into Venice infrastructure, gondolas, hearts and much more! The colouring is also natural as they are made from vegetables or spices, which is pretty cool. 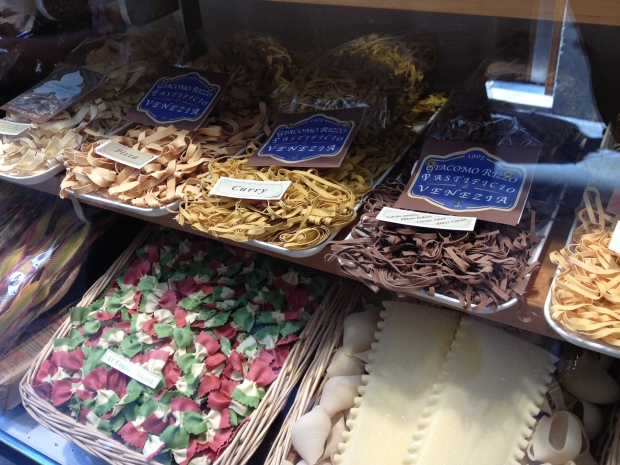 More pasta! I thought these were pretty cool since it was curry flavoured. They also had some truffle flavoured ones. Mmm! 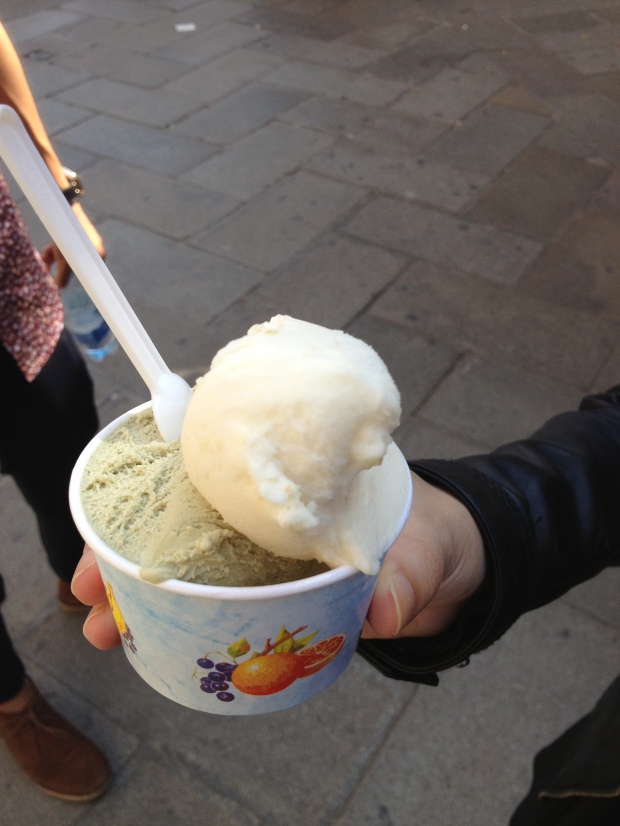 And yea…we ended up getting some gelato again. This was amazing because it was pear flavoured! I love how the Italians use every fruit they can think of. Super refreshing. Underneath is a scoop of pistachio. I can never get enough of that. 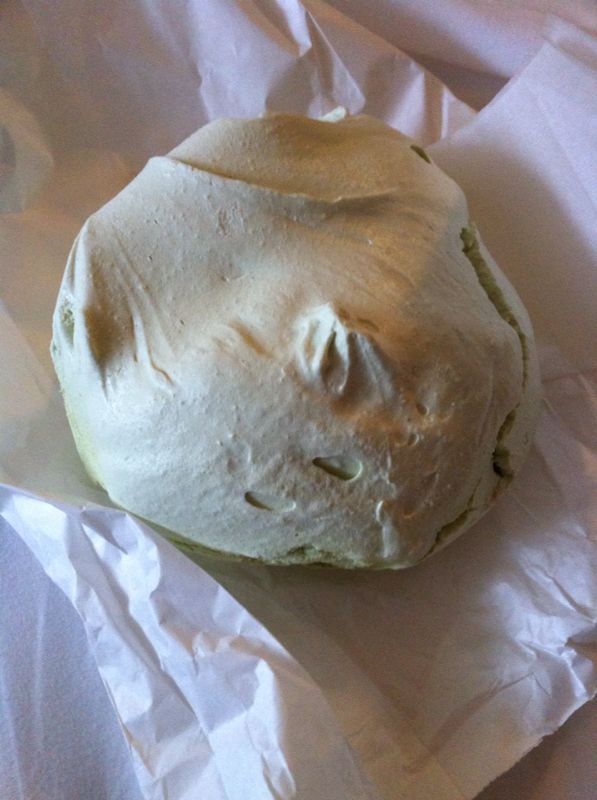 And my sister decided to buy one of those gigantic meringues. It’s literally the size of two fists put together. This one was pistachio flavoured. However, all we could taste was sugar. Well meringues are made of egg whites and sugar… It was so sweet that we both took a few bites and threw the rest out… You need ten people to finish this! It was pretty expensive too… 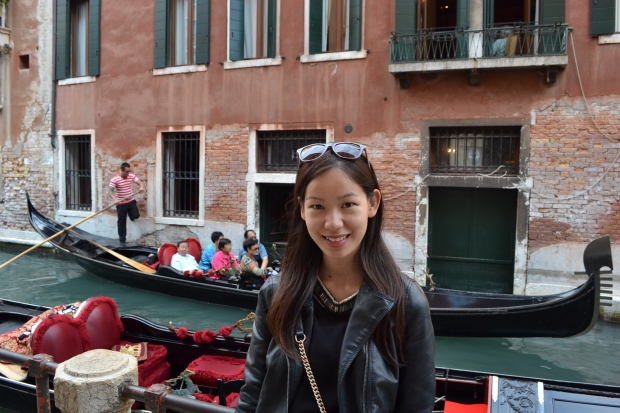 And last but not least, I’ll finish this post with a picture of gondolas! I didn’t get a chance to take one since they are quite pricey and wasn’t worth it when we only had three people. Also note that these guys don’t actually sing… Thought it would be all romantic like in those movies…Nope! Oh well, Venice is still a beautiful city to visit! Jealous of anyone who is heading there! Next post: we head back home to Barcelona!