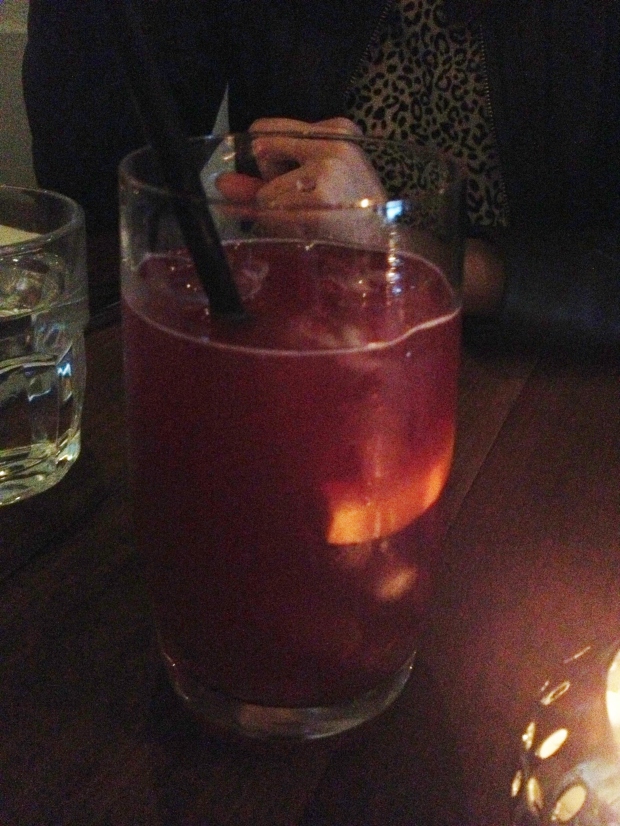 For K’s birthday, I suggested we go relive some Spanish food and check out Espana. I realized that there’s barely any Spanish cuisine here in Vancouver. A lot of Latin American or Mexican food, but not traditional Spanish food. Espana is located on Denman Street, near the Davie area and there were tons of restaurants nearby. They don’t take reservations, but we luckily got a seat quite quickly. It’s dimly lit inside and it’s got a bar table as well. Seems like a great place to grab tapas and enjoy a glass of wine. For drinks, we decided to try their sangrias. Mom got the Espana Sangria, which I think was the best. It was mainly red wine with some brandy and fruits. The rest of them got the Tinto de Verano, which is red wine with lemonade. I really enjoyed the drink in Barcelona, but I didn’t quite like the one here as much.

For myself, I decided to try something weird and got the Kalimotxo, which was red wine and Coca Cola. It was such a bad choice. It tasted quite bitter and I wouldn’t recommend anyone getting it.

Their food is all tapa size, so it’s meant for sharing. Of course, we had to get the Iberian Ham Croquettes. It came with an aioli sauce and they were fried to a light golden brown. I actually really enjoyed the light batter they used here. I think it might be better than some of the ones I had in Spain! You also got a slight Iberian ham flavour to it. 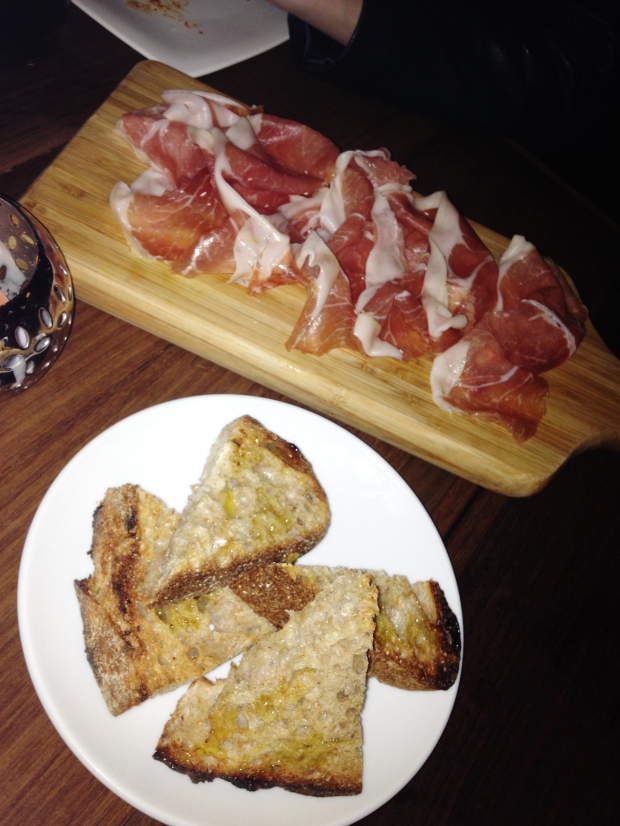 Next, we got the Serrano Ham, which came with some toast that had been lightly slathered with olive oil. Serrano ham is another type of ham and is bred by white pigs. I believe it’s not as expensive compared to Iberian ham, since Iberian ham is only made from Iberian pigs which are acorn-fed. I actually preferred the Serrano ham though, since it doesn’t have that strong pig taste that I find Iberian ham has. Well, I guess that’s why people like Iberian ham so much, because of that taste.

We decided to try their toasts, but they were fairly different from the ones I had in Spain. I think the main difference was the bread they used. It wasn’t thinly sliced like the montaditos we had. This was quite an expensive dish, with only two slices of toast. We chose the one with Marinated White Anchovies, Piquillo Peppers & Quail Eggs. All ingredients that are fairly common in Spanish cuisine. The flavours actually worked together very well. 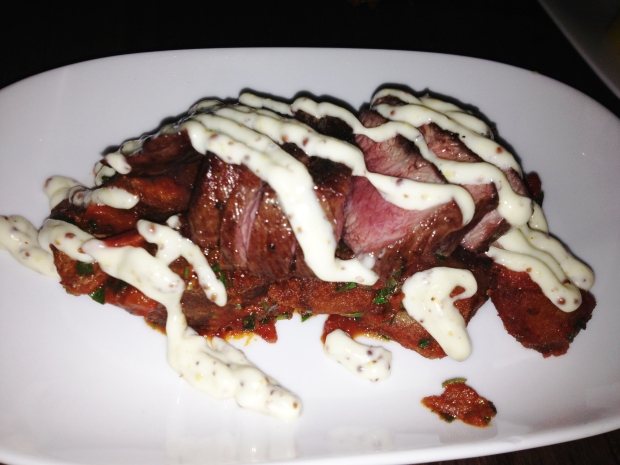 The Grilled Flat Iron Steak was probably our favourite dish. The steak was cooked to medium rare and was super tender. It came with a msutard aioli and some fried potatoes as well. Patatas Bravas are very common in Spanish tapas, but this was a play on it, with the sauce being a little different from usual. The steak was definitely a stand out though.

The Grilled Octopus & Chorizo was a bit of a disappointment. It was a lot of the other ingredients, but lacked pieces of actual octopus. There were probably only 4 small pieces of octopus. It was more like a salad, with roasted peppers and other greens. You’ll also find a chorizo piece here and there. Felt like they lacked the main ingredients of the dish. 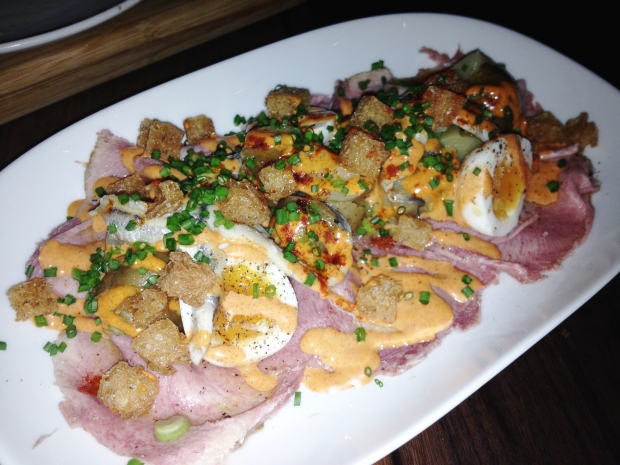 The Ox Tongue & Warm Potato Salad was also a huge hit at our table. The ox tongue was sliced very thin, compared to what we normally get in Asian cuisines. It was so tender! Along with the quail eggs, anchovies and the mustard and aioli sauce, it was definitely very flavourful! It also came with some cubed potatoes.

Last but not least, my parents wanted to try the Daily Paella. It takes a long time to be ready, so you need to order it right away. Unfortunately, I was extremely disappointed with the Paella. It’s not Valencian style, but rather topped with lots of beans, white anchovies, and arugula. The flavour wasn’t my cup of tea at all. It tasted like tomato based beans. Super expensive too! It was around $32 I believe. And I thought the ones in Spain were expensive…

Overall, I was slightly disappointed with the food at Espana. It was nothing compared to the food I had in Spain. I find that their menu is not very traditional, but they grab bits of the Spanish cuisine and play around with the typical ingredients. Not exactly like the food I had in Spain. But I guess this is a good spot to try some Spanish flavours, since we really don’t have many Spanish choices in Vancouver. I also found the menu to be quite pricey and the portions were very small. Still, a restaurant with great ambiance. I’d come back for a small tapa and drinks.