Since we were in the Metrotown area, we decided to grab some food after hiking. We ended up going to Potter’s Garden. There were customers constantly coming in, which is always a good sign! I believe the owners are Korean as well, but they can speak fluent English, so no problem with ordering here!

They first start you off with some appetizers. Here, we have marinated seaweed salad, beansprouts, sweet potatoes, and kimchi. We actually got two sets of these for 5 people, and I’m pretty sure you can ask for a refill.

They also provide you with lettuce so you can wrap your grilled meat, some dipping sauces, and my favourite ssamjang.

We started off with the Bulgogi, which is just stir fried marinated tender beer with vegetables. Since we only ordered two grilled dishes, they did not open up the grill for us to grill on our own. I actually prefer that since I don’t exactly enjoy the grilling part and smelling like grilled food afterwards. The meat was very tender and flavourful. Along with ssamjang and wrapped with lettuce, it was very delicious!

Next, we got the LA Galbi Jui, which are grilled marinated prime ribs. I found the ribs to be slightly disappointing as the meat was a bit tough to chew. And of course, there weren’t too much meat as well. The sauce was very good though.

My favourite of the night was the Nakji-dolsot-bibimbap. This was your typical bibimbap or rice in hot stone bowl with a twist. It has assorted vegetables like bean sprouts, carrots, and zucchini, but also octopus! The octopus was very tender and easy to chew. It was also dressed with the red pepper paste so it was very flavourful and feisty! Recommend! 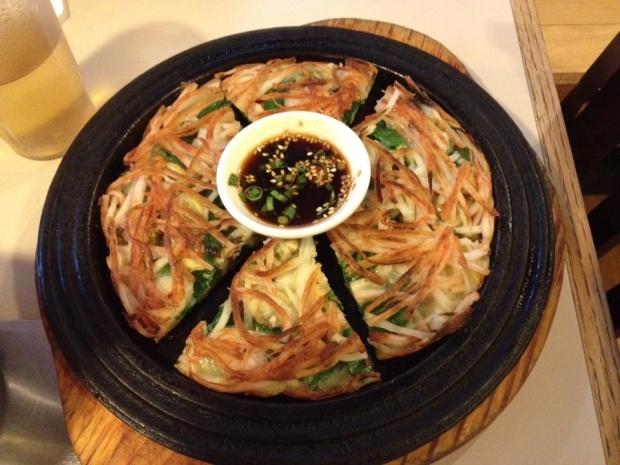 Lastly, we got the Haemul Pajeon, which is the Korean style pancake with seafood. Again, this was the mall size. I thought this was done very well as the top was crispy, and they didn’t cheap out on the seafood. It had a mix of squid, shrimp, and of course lots of chives.

Overall, Potter’s Garden was quite good for the value. Nothing too outstanding, but I would probably revisit again when I want Korean food near Kingsway. I believe they are also open until 2 a.m., so a perfect place to get some drinks and late night snacks.