On Christmas, most restaurants are closed and unless you make reservations well in advance, it’s pretty difficult to get a table on the day of. Mom had been talking about trying the new Copa Cafe on River Road in Richmond for some time now, and it was conveniently opened for Christmas. Not my ideal restaurant to go to for Christmas, but she really wanted to try it, so what could I say… I’m not a huge fan of HK cafe style food, which is essentially what Copa Cafe offers. What was worse was that on Christmas, they only offer their “Christmas menu.” I honestly thought it was a rip off since you had to get their 3 course menu, which was way overpriced for what I was eating. It started off with butter and bread. I didn’t end up eating this since I knew I would get too full by the end of the meal. 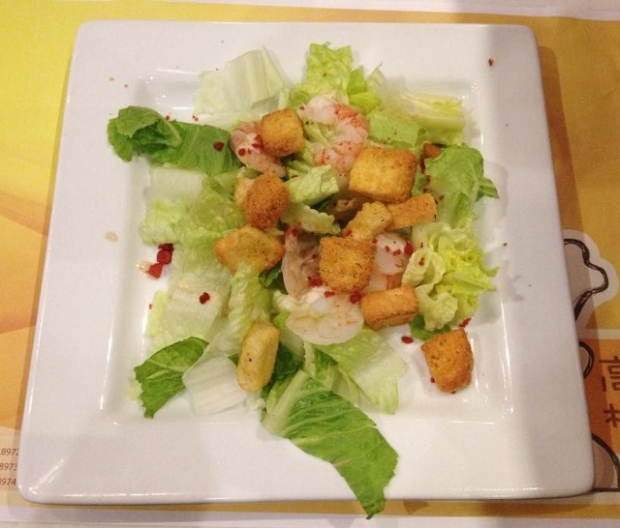 First course starts with the Shrimp Salad, which was quite a large portion, but was missing the dressing sauce. I felt like I had a drop of dressing only. Therefore, the salad was really dry. You got some cocktail shrimps, bacon bits and croutons. I personally thought this was a pretty bad salad. Anyone could’ve made this and it definitely lacked flavour. 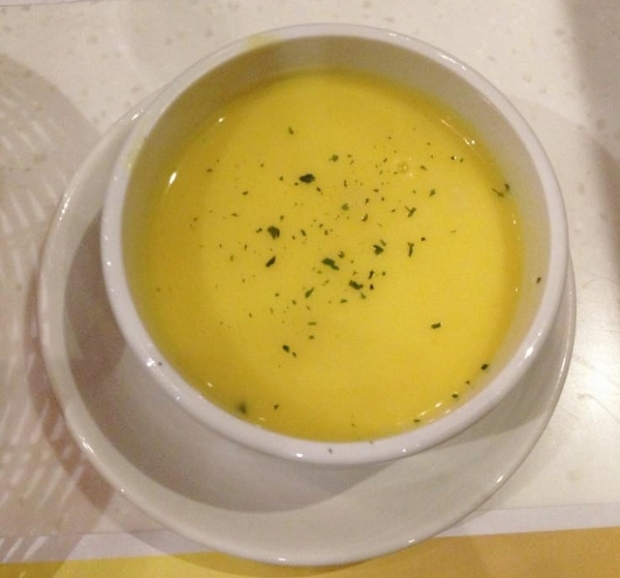 The second appetizer is the choice of Cream Soup or Minestrone. I chose the Shredded Ham Cream Soup. The soup wasn’t hot and already had a layer of cold soup at the top when it arrived. A medium consistency, which I liked, but it lacked any ingredients. You got the tiniest piece of shredded ham here and there.

For my entree, I chose the Surf and Turf. This came with a baked lobster tail, steak in peppercorn sauce, some blanched vegetables, and mashed potatoes shaped like a pear and deep fried. The dish was cold when it arrived. To add, my entree came 5 minutes after my two appetizers arrived. Do they expect diners to eat that quickly? It was the worst service possible, with three plates in front of me. I felt that was really unprofessional. As for the food, the lobster was just average. Nothing special. The steak itself was cooked perfectly to medium rare, but I personally thought the peppercorn sauce tasted disgusting. It ruined the whole dish. Something about the flavour was just off. The fried mashed potatoes were decent but needed to be flavoured. The potatoes themselves were bland. Overall, I wasn’t happy with this dish.

Dad got the Turkey with Cranberry Sauce and Mashed Potatoes. It came with gravy and a side of vegetables. He said they were alright. Your typical turkey. 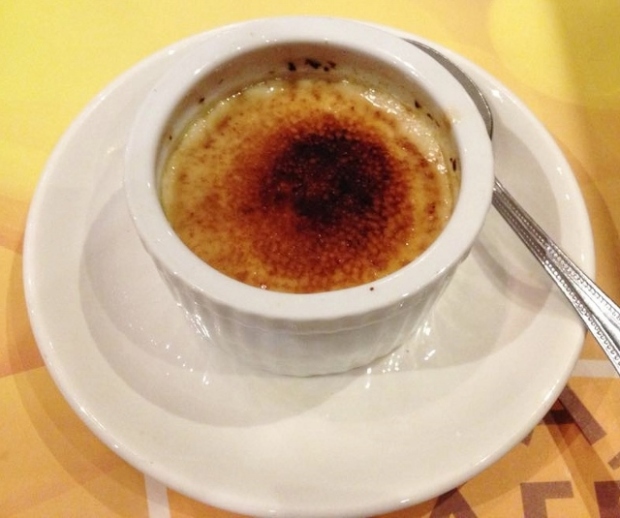 For dessert, it was Crème Brûlée. The sugar at the top was burnt at the top, hence giving it a burnt taste overall. To add, the dessert was watery in the middle. I thought it was pretty disgusting. Your set menu also comes with your choice of hot drink. The menu ranged from $23 to $32, which I found wasn’t worth it considering the quality of food. It’ll get you full, but I wouldn’t order any of this again. Stick with their regular menu.

Pros:
– Decent amount of parking spots in the parkade shared with T&T
– Ambiance was pretty nice and decorated for a HK style cafe

Cons:
– Service was unprofessional – appetizers and entrees came out all at once
– The dishes we ordered weren’t that great