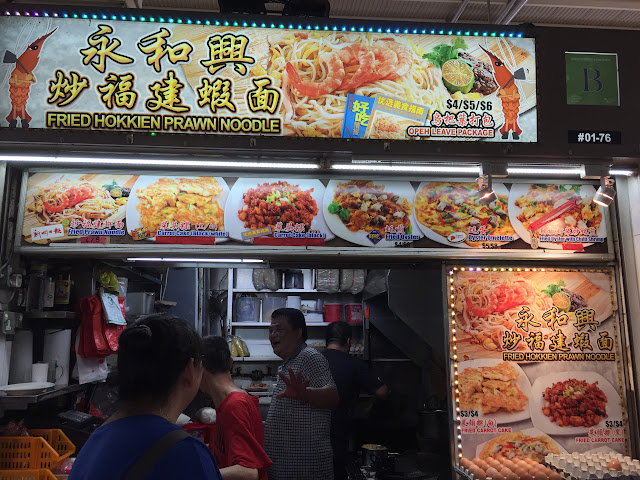 Day 7 would be our last full day in Singapore. Of course our day started off with breakfast. We visited Chong Boon Market & Food Centre in the Ang Mo Kio district. I feel like I’ve visited so many local hawker centres after this trip! 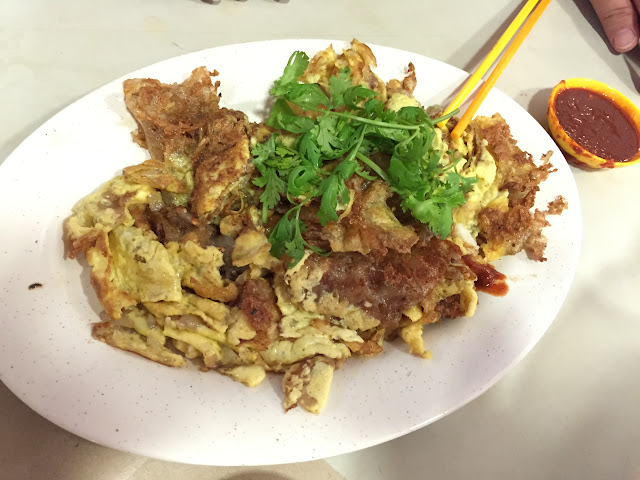 At the Fried Hokkien Prawn Noodle stall, we ordered Oyster Omelette. They use mini oysters in this dish and is really good with a side of chili sauce! 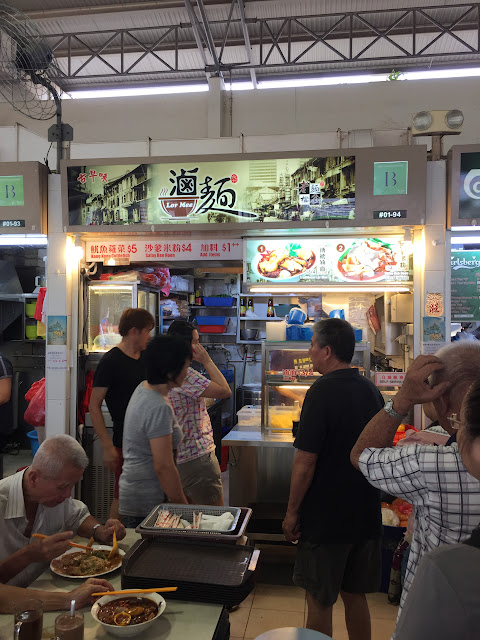 I also ordered from Lor Mee, which apparently is a relatively new stall. 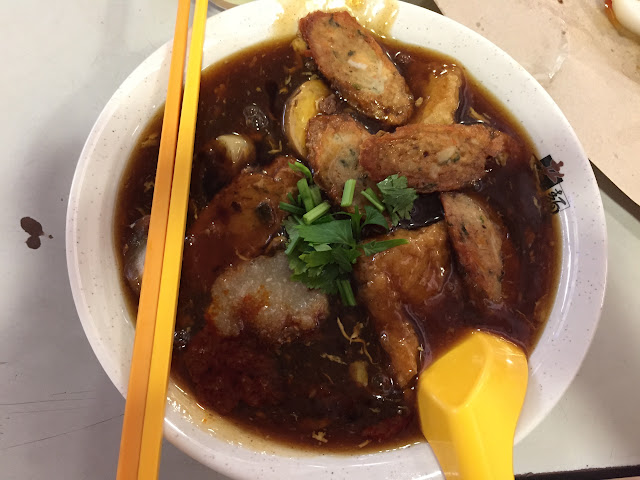 I got the Traditional Lor Mee. It’s basically noodles with a thick sauce and filled with tons of fish cake and fish balls, hard boiled eggs and more. I found the sauce a little bit too thick for my liking. 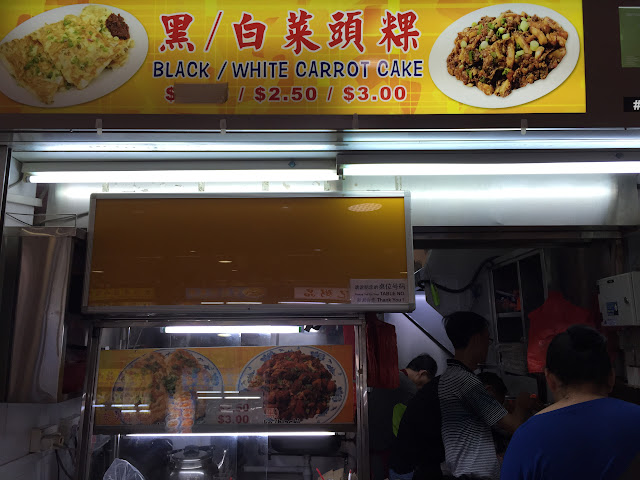 Singapore is also famous for their carrot cake so we ordered from Black/White Carrot Cake. 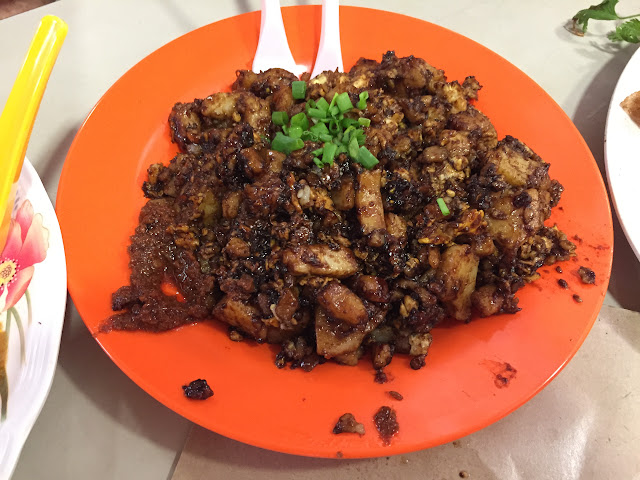 We ordered the Black Carrot Cake since we don’t usually get this in Vancouver. It’s basically a sweet black soy sauce. Quite interesting since it’s sweet rather than savory. They also cut up the cake into really tiny pieces. 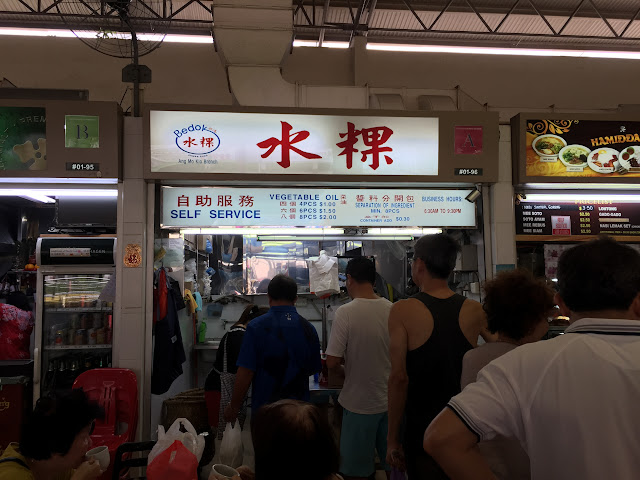 At the hawker centre, we tried Bedok Chwee Kueh. This spot is very famous and therefore has a huge line up! 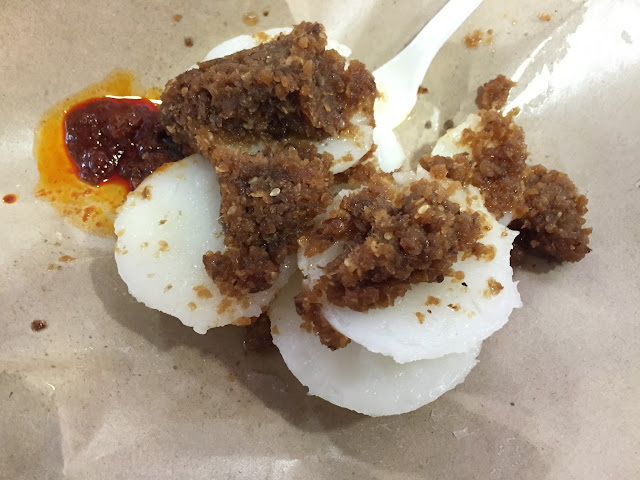 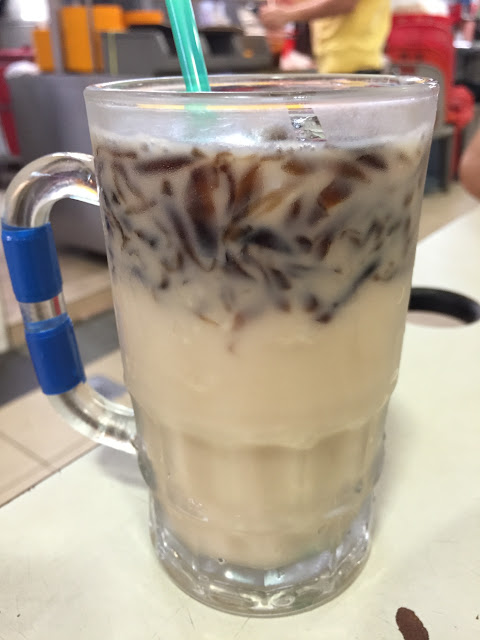 For drinks, I had the Grass Jelly Soy Milk Tea. I’ve had grass jelly with milk tea many times but not with soy milk. Pretty good! 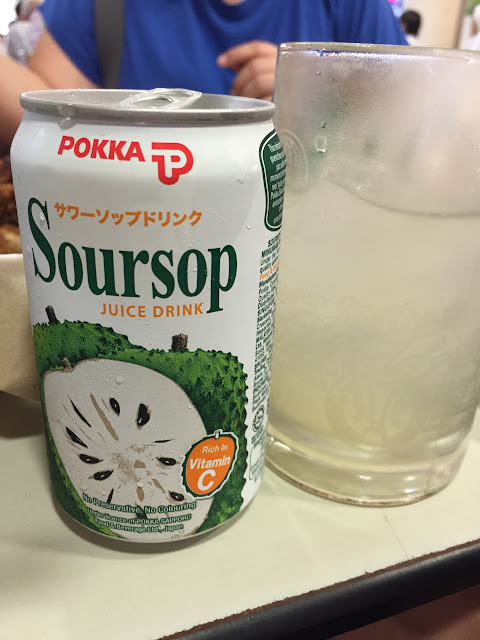 S had the Soursop Juice Drink. A new fruit I discovered on this trip is soursop and it looks like a durian but tastes completely different. Fruity and a must try here! 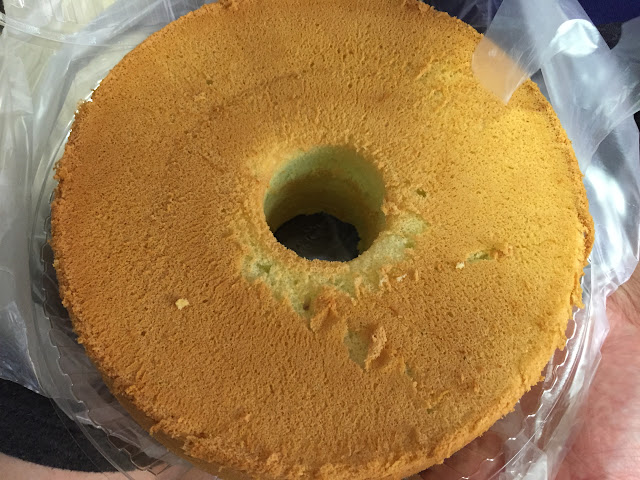 We also bought a Pandan Cake from a nearby bakery. Pandan cake is green in colour and is sort of like a coconut sponge cake. The flavour is from pandan leaves. 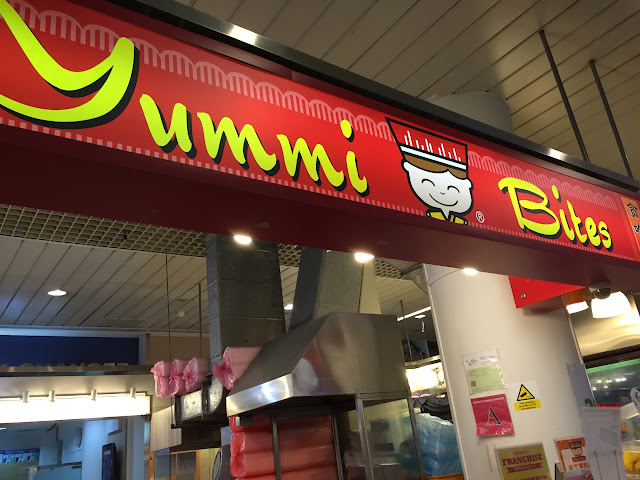 After breakfast S and I headed to the nearby local mall since I wanted to buy some local food products at the grocery store. I ended up with a bag full of laksa sauce, Hainanese chicken rice sauce and much more! We also got a snack at Yummi Bites. 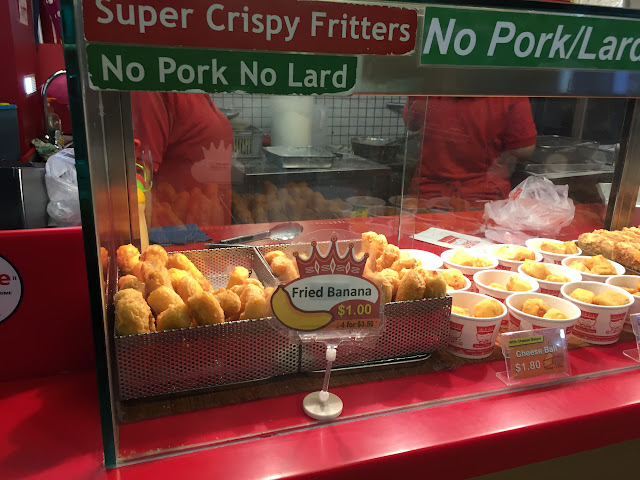 We got the Fried Banana! Not bad but I don’t think they are freshly made. 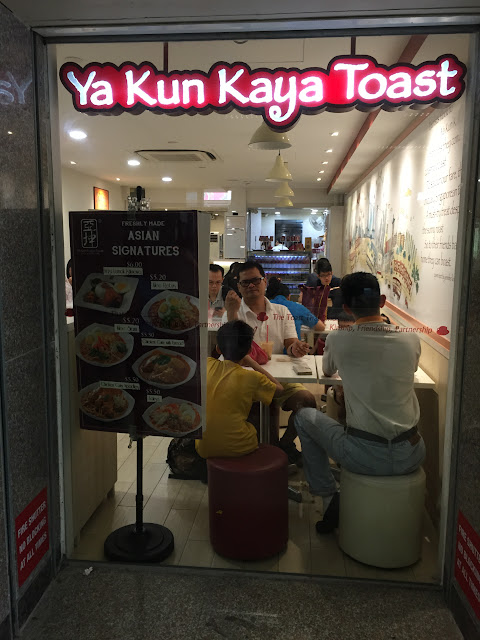 At the MRT station, we found Ya Kun Kaya Toast which I have been wanting to try for so long. Locals told me they have some of the best kaya! You can find their stores at most MRT stations actually. 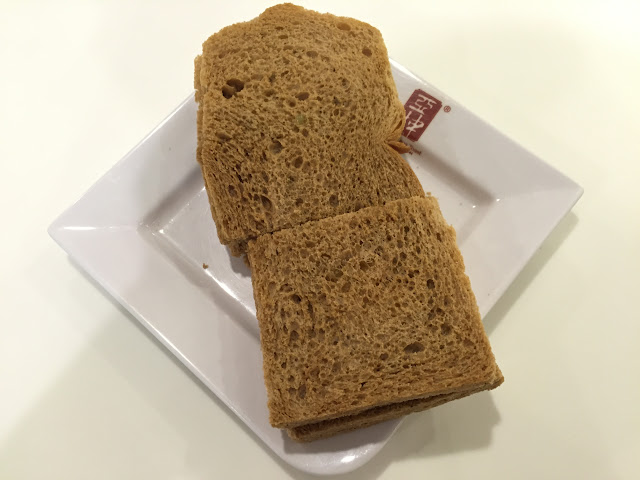 We got the original Kaya Toast and holy! This is the best toast I’ve had. The toast itself is toasted perfectly so is really crispy. Filled with kaya and a thick slice of butter, this is probably really bad for you, but so so good! Way better than Toast Box in my opinion! I ended up leaving with a jar of their kaya and have finished it by now! 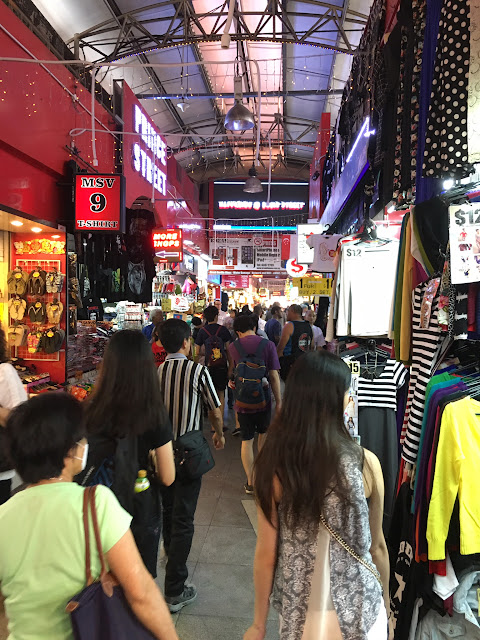 We then took the MRT to Bugis MRT Station as we wanted to check out Bugis Street. This is basically a street filled with cheap goods and souvenirs. Sort of like the night market. You’ll find cheap watches, shoes, and clothes here. We later found that they have expanded upstairs now with tons of clothing shops for young women. The clothes here were a lot more trendy than downstairs and had a Korean feel to it. I’m definitely coming back here next time I visit! 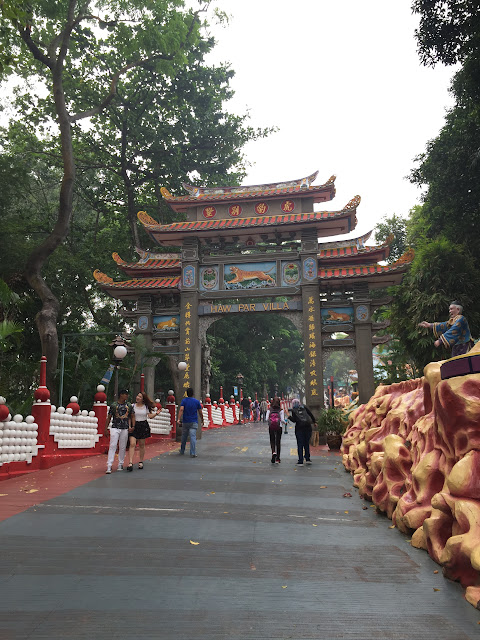 After shopping we met up with S’s aunts and cousins and they suggested to visit Haw Par Villa. S said he had visited this attraction when he was a kid and it was the creepiest place… we all got curious and since admission is free, we decided to go check it out. It used to be called the Tiger Balm Gardens since the brothers who developed Tiger Balms first created the park. 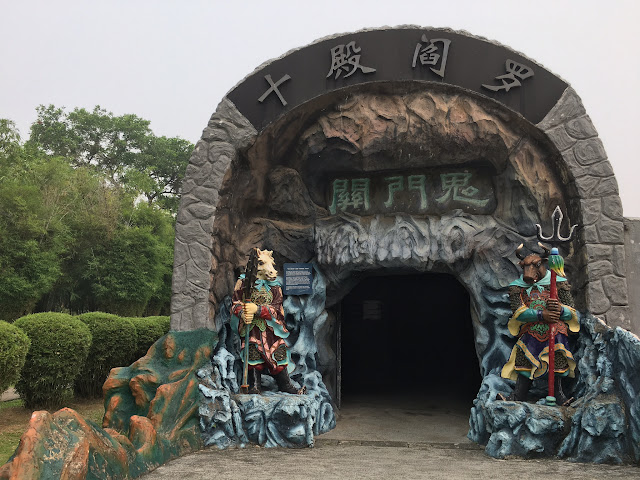 Inside, you will find many sculptures depicting scenes from Chinese mythology and folklore. The most famous is the Ten Courts of Hell which is a creepy dark tunnel filled with depictions of what would happen to you if you went to hell based on Chinese myths. It’s pretty creepy in here and they get really detailed with what happens… You’ll have to visit yourself to see what’s inside as I find the pictures to be too scary to post here… 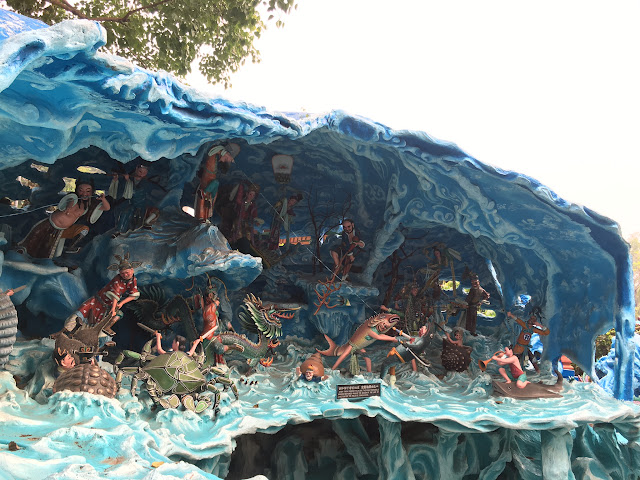 These are some of the other sculptures you’ll see at the park. They’re all very detailed but we found the park to be very random. You’ll enjoy it if you’re into mythologies though. 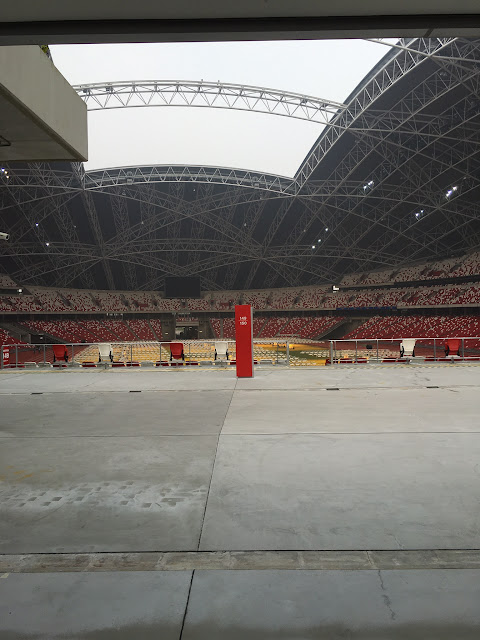 After Haw Par Villa, we took a quick drive around National University of Singapore and then checked out the National Stadium. It features a dome with a retractable roof, which is very similar to BC Place in Vancouver. 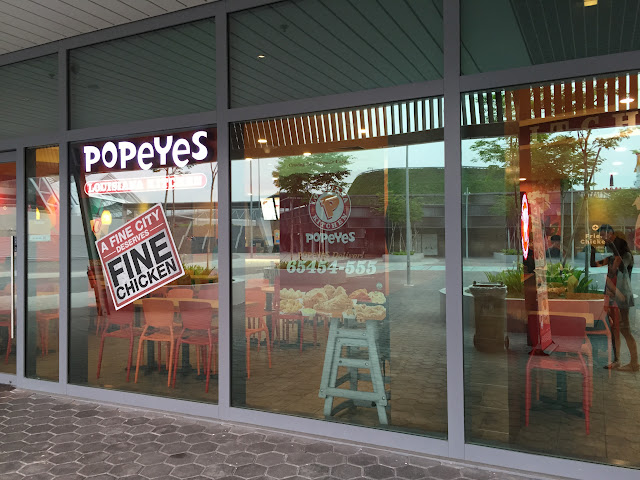 As we were near a mall and were a bit hungry, we decided to grab take-out at Popeyes! We don’t have it in Vancouver so I’ve always wanted to try! 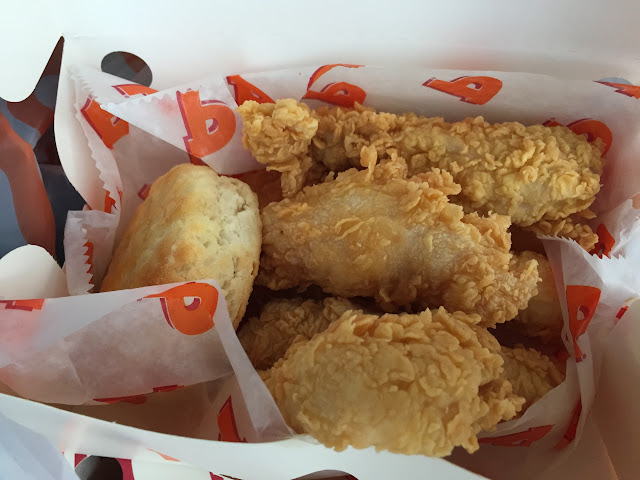 We got some chicken strips and their famous biscuits. Mmmm pretty good but I think I still like LA Chicken the most! 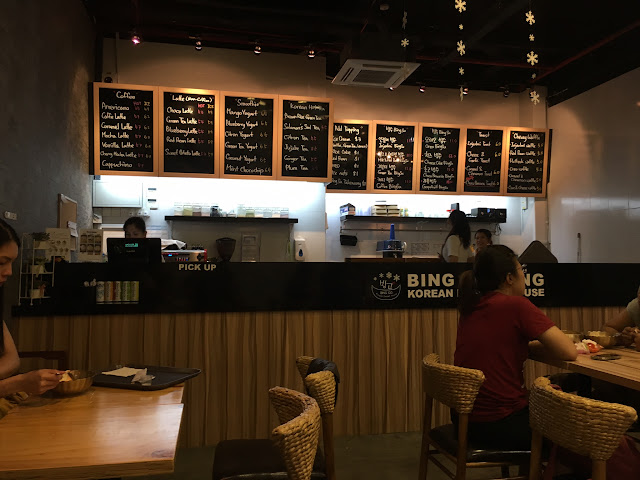 We did a bit of shopping around nearby malls and then decided to check out a Korean dessert place called Binggojung. 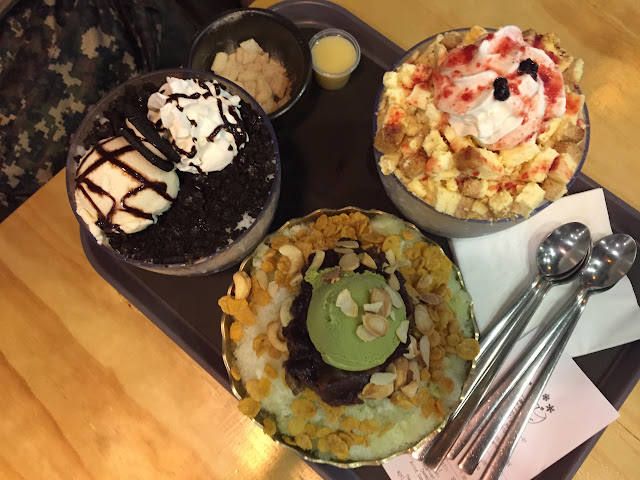 We got the Oreo, Matcha, and Cheesecake Bingsoo. The ice is not as fine as the ones I had in Korea but not bad. Plus they’re pretty to look at! 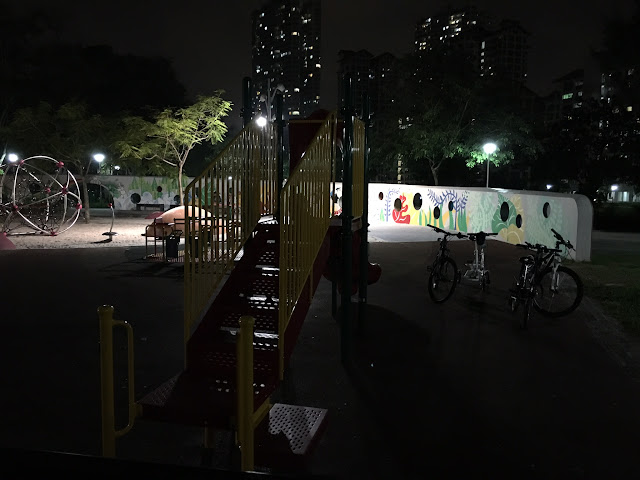 After desserts, we headed back to the aunt’s and decided to take a bike ride around the nearby park with the cousins as it would be our last night in Singapore. The weather is really nice to bike at night as it’s no longer as humid. We headed home and packed our bags for the flight to our next destination the next morning. Until next time Singapore!