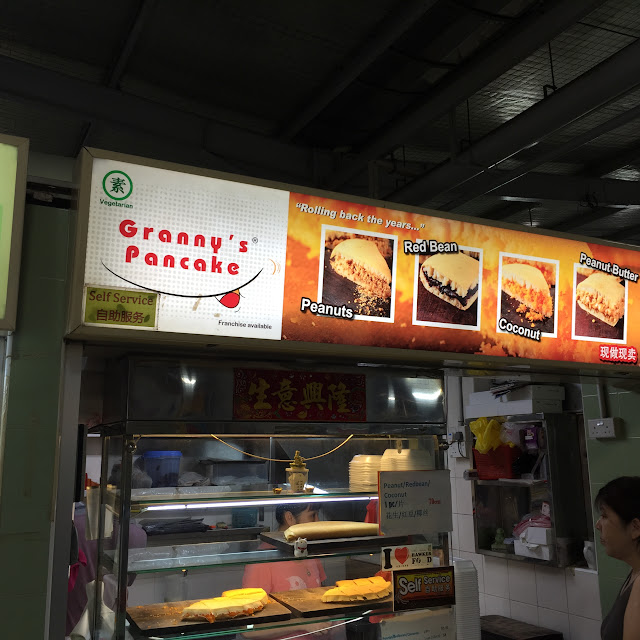 Day 8 of our trip in Singapore really only gave us enough time to grab breakfast and head to the airport since our flight was at around 10:30am. We went to Toa Payoh Lorong 8 Hawker Center and tried Granny’s Pancake. 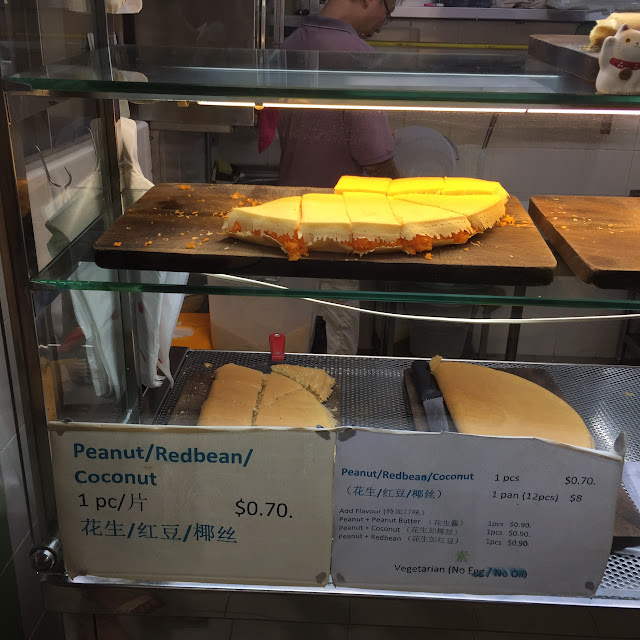 We got one Peanut and one Coconut Pancake and oh my goodness! These are so good! They are sort of like mochi cakes and the filling inside is really good. Must try! They are under a dollar too. 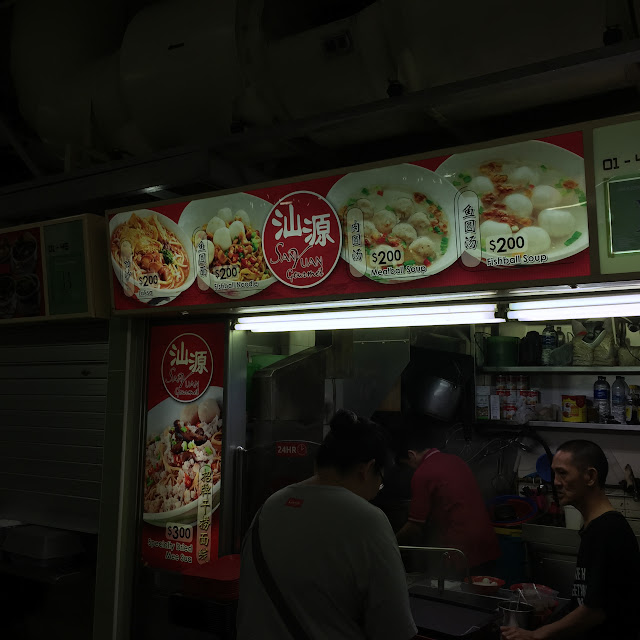 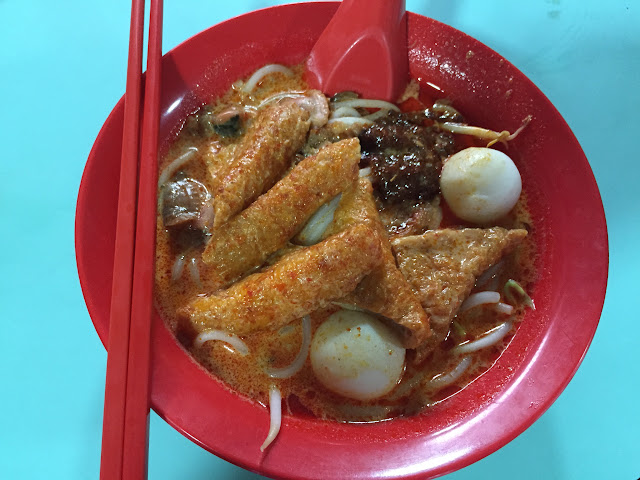 I ordered the Laksa for a killer price of $2 SG. It came with bean sprouts, tofu puffs, fish balls, and fish cake. Really good! 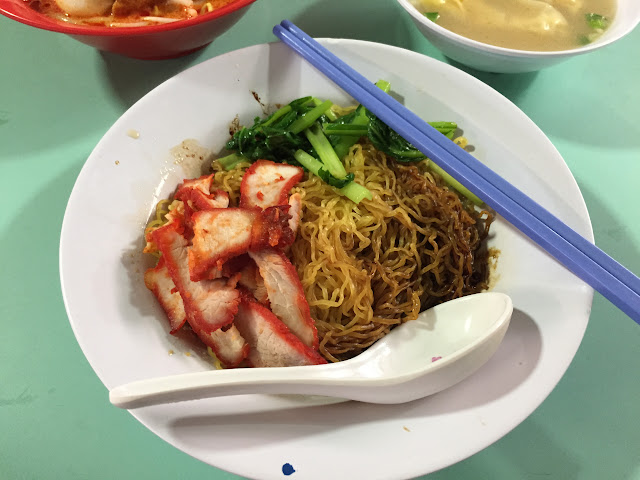 S got a BBQ Pork Noodle. I don’t remember which stall he got it from. 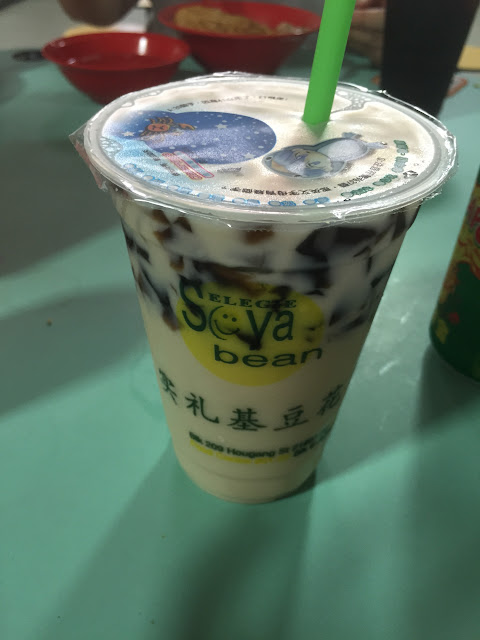 I had the Grass Jelly Soya Bean drink again. We don’t seem to have this a lot in Vancouver. 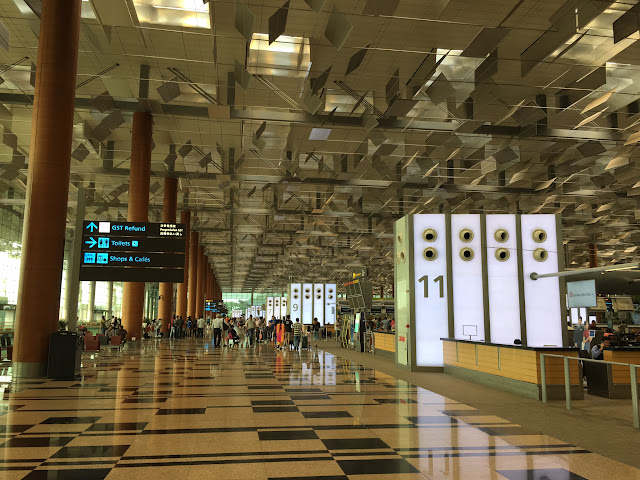 The aunt then drove us to the Changi Airport. Such a nice modern airport. Security was very quick and we had tons of time to spare. 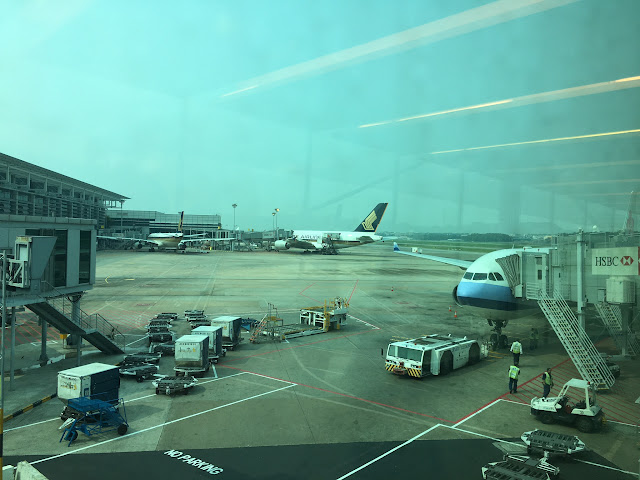 We took China Airlines again and took off at around 10:30am. At around 3:00pm, we arrived in Taipei. It’s actually a pretty long flight as the two cities are actually quite far. Luckily this aircraft was brand new and was barely at capacity so we had tons of space and great service. 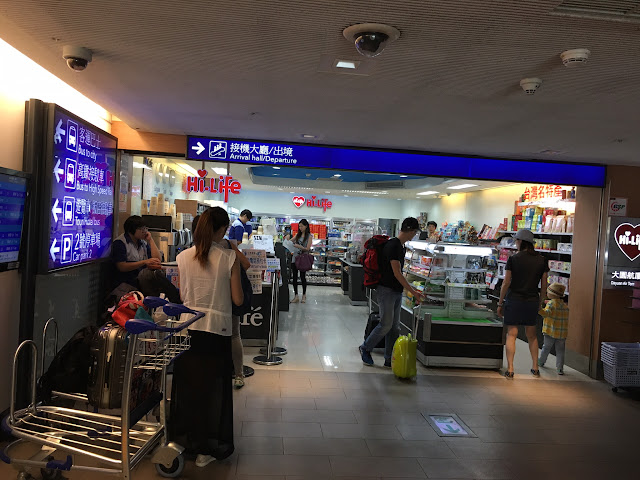 We arrived at Taiwan Taoyuan Airport and customs took quite a long time. Finally we collected our luggage and we went to the basement floor to the HiLife convenience store to retrieve my pocket WiFi we had rented. Wifi on the go is convenient so we had ordered online from iVideo before arriving. Super convenient as you just order in advance and pick up at your chosen location with two being in the airport. When you leave, you can drop it back at the same location. The employees were super helpful and friendly. Depending on which device you get, it can cost around CAD$15-18 for five days. If you can read Chinese, check out the Chinese version of the site and you can enter a promo code to get some discount off. We ended up paying only around $20 for 7 days. It can support up to 8 wifi devices so great to share. The only downside was the battery only lasted around 6 hours and it would shut down when we most needed it. Remember to bring a portable battery pack or purchase one to rent as well. 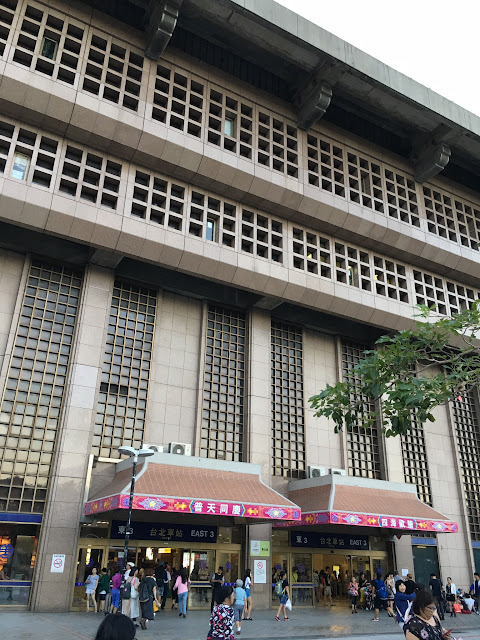 After picking up our wifi, we headed to the bus station. You can purchase your ticket easily inside with a vending machine. If you are going to city center like us, take the 1819 Kuo-Kuang Motor Transport and it will take you to Taipei Main Station where you can exchange to a metro or cab to get to your hotel. It’s a pretty long ride and took around an hour. It only costs NT$125 one way so around CAD$6. 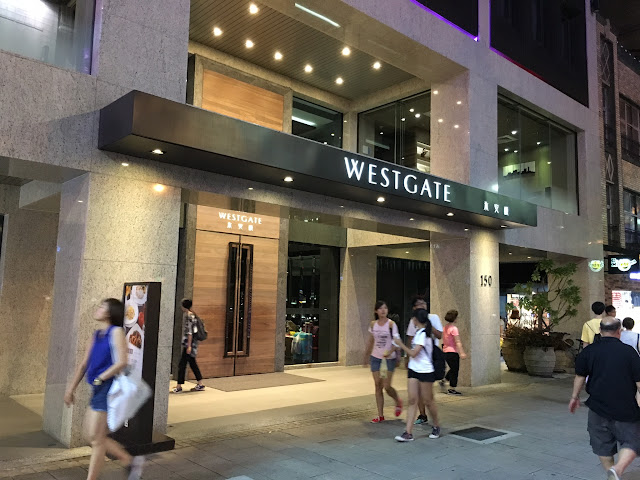 As our hotel was right in the heart of Ximending, we had to transfer after getting off at Taipei Main Station. We decided to cab since our luggage was quite heavy. Cab fare was quite reasonable at around NT$100 and was only a short 5-10 minute ride. We stayed at Westgate Hotel which was awesome! 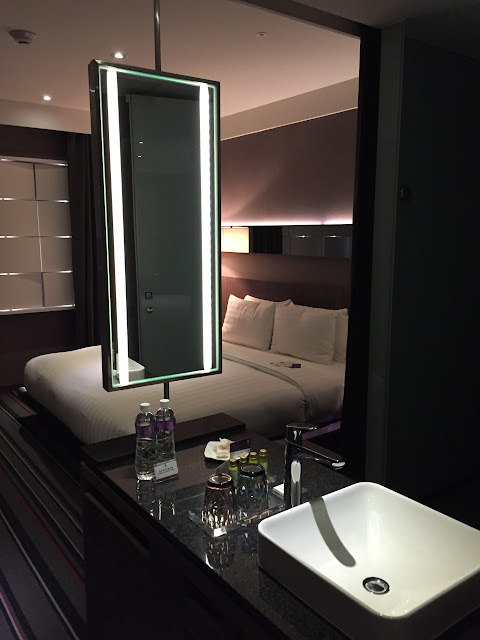 The rooms were spacious enough for us and the bed was comfy. The only weird thing is the sink is right at the entrance of the room but I didn’t mind it as I could use it while someone was in the shower. We paid less by choosing a room without windows but that actually didn’t bother us. There are tons of complimentary items including bottled water and a pineapple cake on the first day. Water and amenities are replaced every day if you finish. 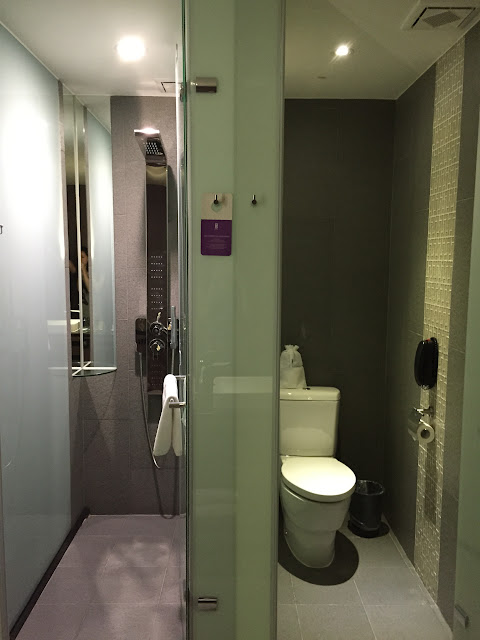 The bathroom situation is pretty unique with the shower and toilet separate. Pretty good again since we don’t need to wait for one another. Loved the faucet of the shower with different massaging heads. The design was great so that none of the water spilled out. Only downside is that you sort of need to come out to get dressed so not ideal for sharing with friends. 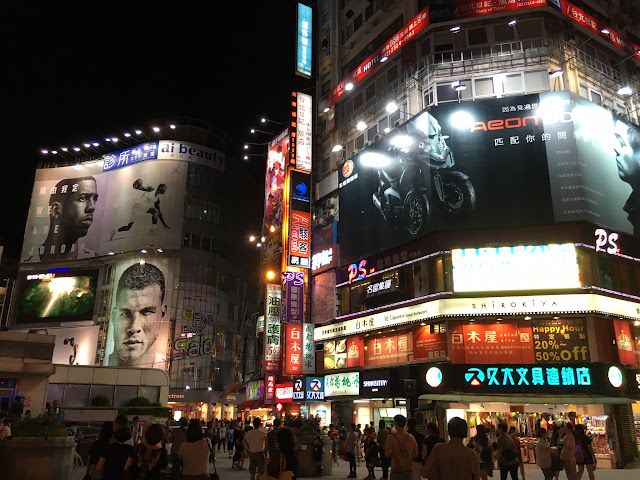 Although Westgate Hotel was a bit pricier than the other options, one thing we loved about it was the location. Literally one minute away from the MRT and a step away from the crowds of Ximending. Ximending was super cool since it was sort of like Taipei version of Shibuya in Japan. Bright lights and tons of trendy young shops. Great for the young crowd! 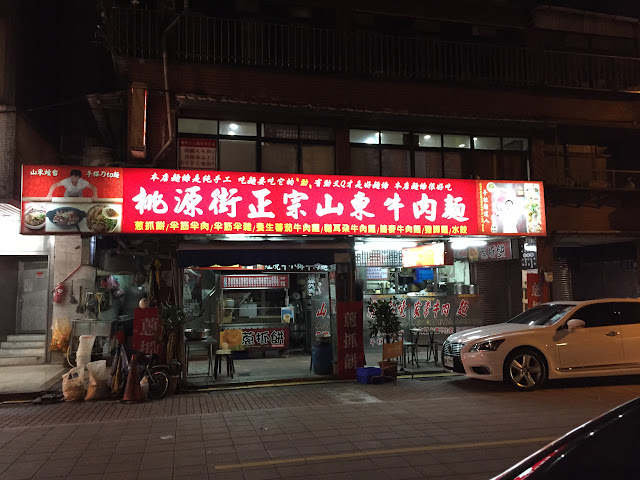 Of course I had done my research for food, so we took a 10 minute walk to find Tao-Yuan Street Beef Noodle Shop. It’s a bit away from the bright lights and a little quieter in this area. It was pretty hard to find but look for that big red sign! 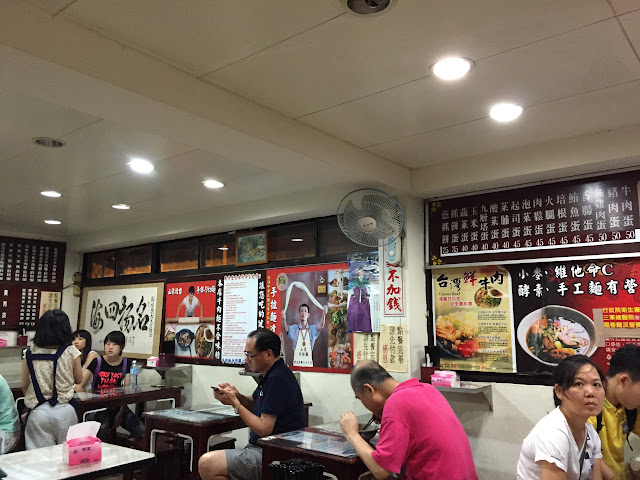 The tricky part is you also have to head up stairs. The waitresses barely speak English, but she was super nice and gave us a stack of all the order sheets that had gone through to show us what the popular dishes were. Menu is in Chinese so if you can’t read it… you’ll have to order with a surprise. 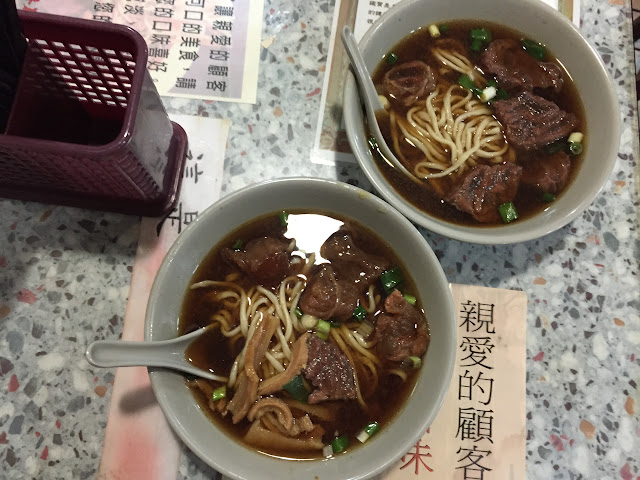 We both got the Signature Beef Noodle Soup with S getting one with all beef, while I got a mix of beef, beef tendon, and brisket. The noodles and soup were really good! My beef was really tender although S had a piece that had a lot of tendon in it and he didn’t quite like it. You pay when they place the bowl in front of you. A must try! Prices are around $6-8 a bowl. Consistent with Vancouver pricing. 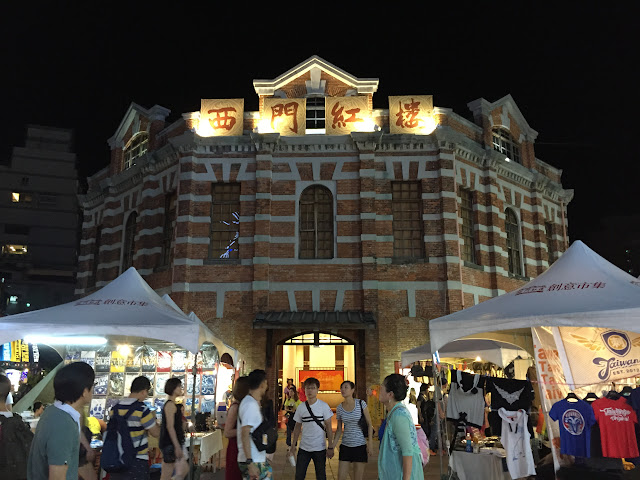 After dinner, we headed back to the Ximending area and checked out the Ximen Red House. This is a historic theater and built back when this area was under Japanese rule. Today, it houses a display of the history of the structure, some cafes, and shops where artists sell art. Around this area, there was also a night market going on where many vendors sold handmade products. 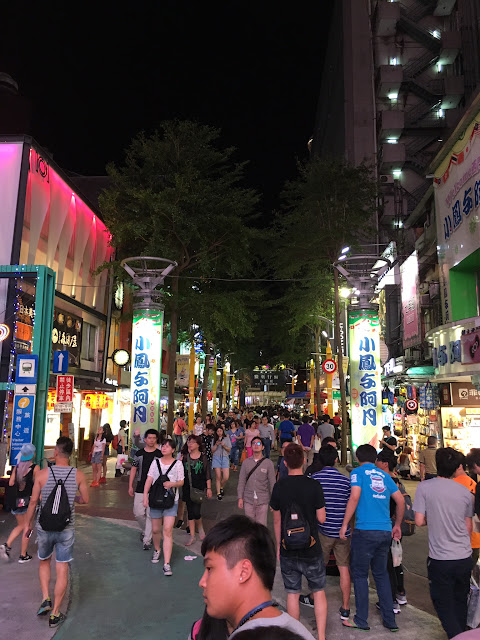 We then headed back into the busy streets of Ximending where there were tons of shops and food carts. This is actually the first pedestrian area and the largest in Taiwan. 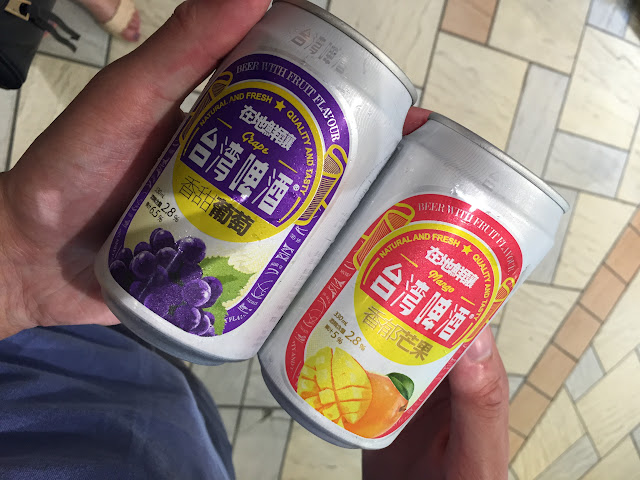 Getting thirsty, we headed into a 7-11 to purchase my favourite Taiwanese fruit beers! These are so cheap here…at around less than CAD$2. Mango was my favourite! Oh and by the way, 7-11s are literally on every block of this area! 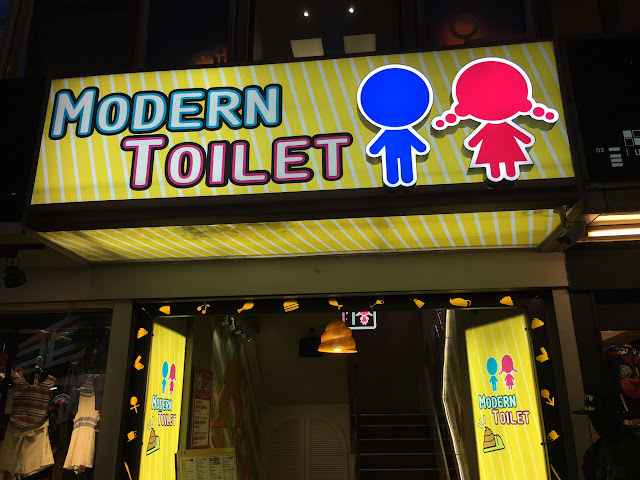 The famous Modern Toilet was a place I wanted to see. I’ve heard negative reviews about the food, but I’m a sucker for restaurants with a cool design so I wanted to check it out. 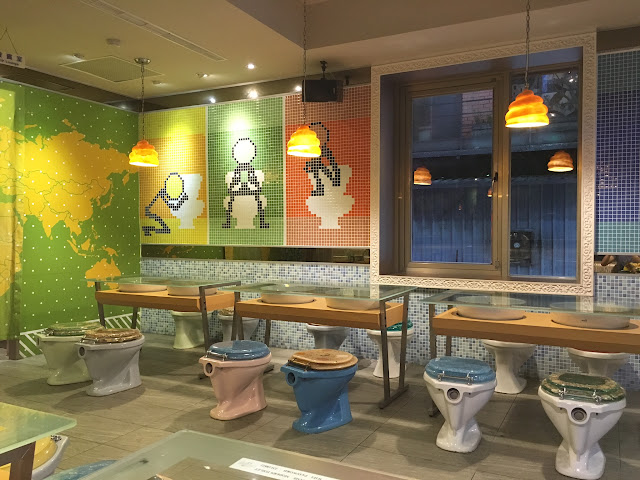 The restaurant’s ambiance definitely wowed us. Super fun since you sit on a toilet and everything is just bathroom themed. 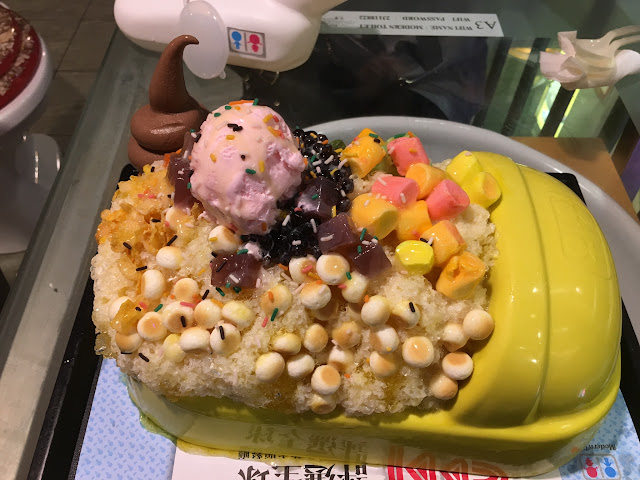 They serve actual meals, but I heard pretty bad things about it, so we decided that desserts couldn’t be too bad… Well we were wrong. We ordered the Passionfruit Shaved Iced and this was the largest bowl of shaved ice I’ve seen! But it was also disgusting.. The toppings they put on there were the sweetest and cheapest stuff ever. We barely made it through because it was so sweet and it just didn’t taste any good! 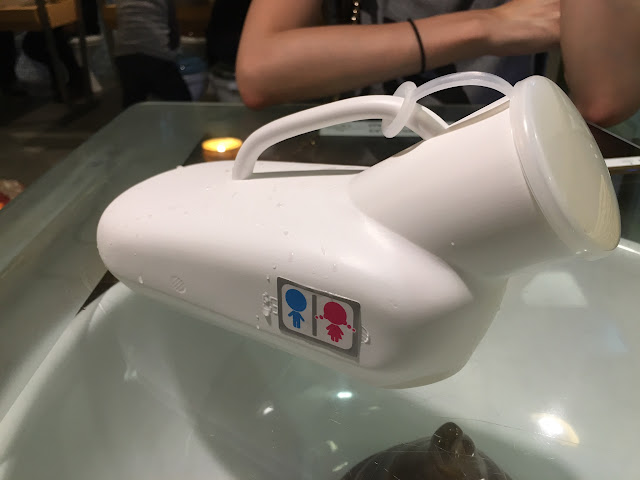 We also ordered the Fresh Milk Boba and paid extra to have it in an urinal. This was also disgusting… Apparently fresh milk literally means fresh milk… I guess we missed the word tea in it? So we were served fresh milk in an urinal and for some reason the inside looked really dirty… Why was their brown stuff in it? The pearls were pretty good though as they were the clear ones which I haven’t tried before. But other than that, Modern Toilet was a miss and I would recommend skipping it altogether.

Since we were pretty tired from our flight, we headed back to our hotel and called it a night.