Wing Kee is super close to my place and I literally drive by it all the time going home, but I’ve never been intrigued to try it. It just didn’t look attractive from the outside. However, I did some googling, and the ratings turned out to be alright. Finally, we decided to make reservations for dinner here. The parking lot is quite big already for one restaurant, but it’s completely packed! We decided to go for their Choose 5 Dishes for a set price. It also came with half an order of complimentary Free Range Chicken. When we thought half an order, we thought it wouldn’t be much, but it was basically what you would get as a whole order normally at other restaurants! The chicken itself was pretty good too. The only issue I had was I found it odd that some of the chicken was cold, and some of it was warm. Definitely microwaved this.

The first dish we got was the Honey Garlic Spareribs. I thought these were just average. The sauce was flavourful, but the meat was a little tough sometimes. 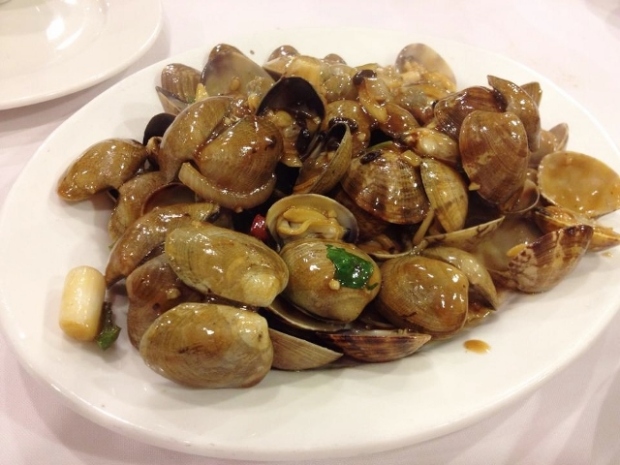 My favourite had to be the Pan Fried Clams with Black Bean Sauce. We had to add a bit of money on top of the set price for this dish, but it was well worth it. Every shell on the plate had clams in it and they were very flavourful. A good amount for the price. 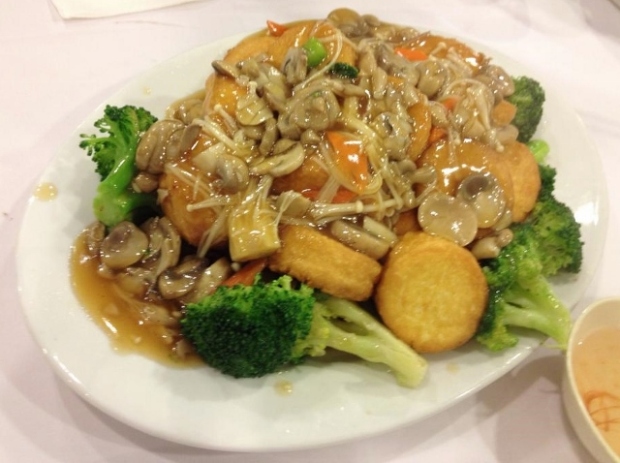 Next were the Braised Deep Fried Bean Cake. It was mixed with broccoli, and mushrooms. The sauce was thick and flavourful. The tofu inside was very smooth.

Next up were the Deep Fried Chicken Wings. These wings were super plump and full of meat! Crispy skin and a peppery and spicy flavour. I wouldn’t say they were the best I’ve had, but not bad for the price since you get roughly 12 pieces.

The last item was the Sauteed Beef in Satay Sauce Hot Pot. To our surprise, the dish did not come in a hot pot, but rather in a clay dish. There were tons of vermicelli noodles and it was covered with the satay sauce. There were a lot of beef as well, but the beef did not taste like beef. Sort of weird…Perhaps they used too much tenderizer?

Lastly, dinner ends with complimentary dessert. Tonight, it was Sweet Potato Soup. Great to combat the cold since there’s ginger in it. Spicy and sweet, but also very warming.

Overall, Wing Kee was actually much better than expected. The prices are very affordable as well, and the portions are huge! We ended up packing a lot of the food up. What was even more surprising was how friendly the service was here. Most of the servers are young males, and they were very attentive and polite. To be honest, that’s not very common and expected at Chinese restaurants. Oh, and Wing Kee is also opened until til 3 a.m. everyday, so another place to add on the list for late night snacks.

Makoto Ramenya is a relatively new Japanese izakaya restaurant that opened up in Coquitlam. It’s run by Koreans and is open til late. Since it is super close to J’s place, we end up going here whenever we’re lazy to go anywhere far. I thought the restaurant would have ramen, but apparently it’s only offered for lunch. So instead, we had to go for their izakaya food, which is honestly quite limited. We started off with the Tuna Tataki, which had only 4 pieces, but priced at around $9. Pricey! I mean, it wasn’t bad or anything, but I wouldn’t pay that much for so little tuna tataki again.

Next, we got the Fresh Seafood and Vegetables in Tonkotsu Soup. It came in a little hot pot with a flame lit below. The soup comes without noodles, so we had to add $3 for ramen, which seems pretty expensive since the pot was over $10 to begin with. I found that the soup was filled with bean sprouts more than anything. The seafood was probably just frozen seafood. As for the soup, we got the “little spicy” version, which was just plain weird. Something was just missing in the soup. It was really bland. The ramen just tasted like store bought ramen too. Nothing special, which means I’m probably not going to try their ramen for lunch.

Lastly, we had the Beef Yaki Udon. Unfortunately, we were halfway done eating, when I realized I hadn’t gotten a picture. So the dish is actually double the portion pictured here. This was alright, but again, nothing too special. I mean it’s quite hard to mess up a beef yaki udon…

Overall, I wouldn’t say the food is any great at Makoto Ramenya. Everything is just average. However, the second time I came back, I had some drinks and it was really fun. The atmosphere at night is really chill here, so a good place to hang out and have drinks with friends. They have Japanese beers and Korean soju here. The servers and owners end up sitting around with customers too, so service is either a hit or miss, depending if you can get their attention.

N had just come back from exchange, so along with S, we headed to Maji for dinner. Maji has opened for some time now, and I kept hearing good reviews about this Taiwanese restaurant. It’s located on Alexandra Rd. right next to Leisure – also Taiwanese owned. When we arrived, it was quite empty, with only one or two tables for dinner. However, it was a random weekday. I hear that it’s quite packed on weekends. Apparently, it’s been quite packed recently as well, since they just launched their Taiwanese beers in mid July. They seem to have a large variety of beers and drinks, so it would be a great place for a night out. They also open until quite late. 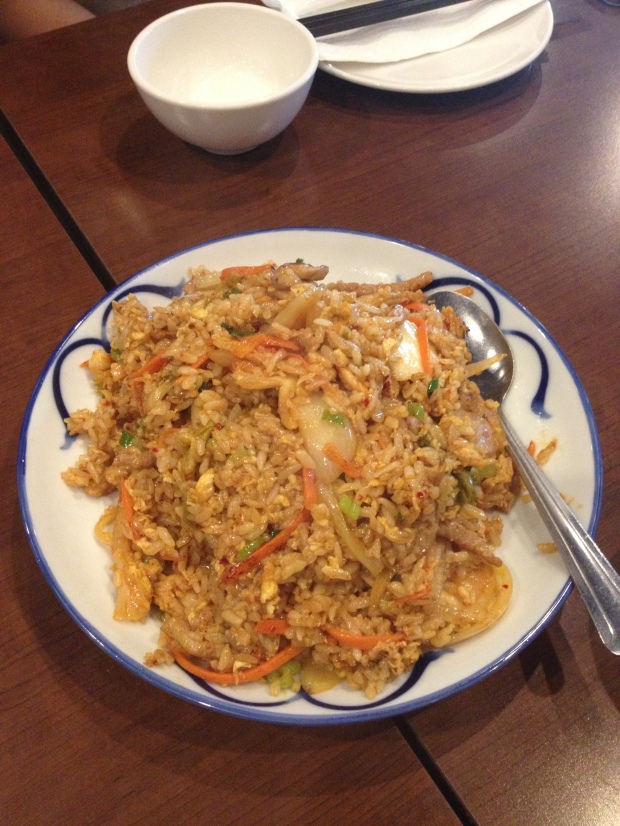 Maji is a great place to share dishes. It’s not like Pearl Castle and others, where you order your own set of food. Hence, we ordered 4 dishes to share. First, the Kimchi Pork Fried Rice. This was actually my favourite dish! A hint of spicy kimchi, but very addicting! The rice is also on the moist side compared to Chinese fried rice, which I really liked. I could not stop eating this! Very flavourful, but I didn’t feel like it had MSG in it since I wasn’t thirsty after.

Next was the San-Pei Squid. This was more mild and the only non-spicy dish we had. Still, very flavouful with the San-Pei sauce. The squid were also very tender and easy to chew.

Lastly, we had the Kung-Pao Chicken, which I unfortunately, took a blurry picture of. I found this dish quite spicy since there are Sichuan peppers and dried chili in it. However, it was super tasty at the same time! Love the nuts in it too. I believe they were cashews.

Overall, I was very pleased with the food at Maji. Prices are also very reasonable. It’s more about the food than presentation here. Since it wasn’t busy, we were also able to sit for quite some time to just chat and the waitresses kept refilling water for us. Great service and good food!

I finally met up with the people from my school who are going to Barcelona with me for exchange! K suggested we go to The Famous Warehouse for lunch to talk about our traveling plans over some cheap food and drinks. I’ve heard of this eatery before but never knew where it was exactly. I’ve probably walked by it multiple times as it’s located right on Granville, just a little past the shops and right next to multiple clubs. No wonder people come here for drinks and food before and after clubbing. Don’t expect good service at all, because the selling point of this eatery is their cheap food.  All at  $4.95. The place is pretty much like a pub, and it definitely smells like a pub. After waiting for around 20 minutes with no one acknowledging us, a customer who was leaving tells us there are spots in the back. We walk a few steps in, and a server finally talks to us and takes us in. We were then served by a lady, who I have to say gave decent service compared to the reviews I’ve read online. She checked up on us, which I was surprised after reading such terrible reviews.

K got a glass of beer and Yam Fries, while U got a glass of white wine, which was poured in a highball glass… Pretty weird. She also got the Twisted Greens and added chicken to it for another $2.

For myself, I had read some reviews before hand, and most diners agreed that the burgers were the most decent. I got myself the Mushroom Jack Burger, which was a fair size. Not as big as other restaurant, but definitely not a slider. Maybe the size of  a McDonald’s burger. It also came with a side of Peppered Fries, which I couldn’t finish in the end. The beef patty was moist, and there was an abundant of mushrooms. I have to say it was  a decent burger, especially at the price. I also got myself a Palm Bay, which ended up being more expensive than my meal.

I think they make money through their drinks, because all their drinks are priced higher than your actual meal. My Palm Bay was around $5, and it’s probably one of the cheapest alcoholic drinks you can get on the menu. Oh, and they don’t list the prices of beverages on the menu, so you don’t really know how much you’re paying for until you get your bill. I think most of our bills ended up over $10. The place also seems to always be busy. It’s a great place to go if you’re just looking for cheap food and don’t care about service or waiting. If that’s not your cup of tea, then definitely avoid it.