A trip to Seoul isn’t done properly if you don’t have some street food! I was actually surprised that there weren’t as many street food stalls as I had imagined. Anyways, if you’re looking for street food, Myeongdong is a good option since you can shop and eat. However, most of the stalls don’t come out until the evening time. I love grilled sausages, so this stall caught my eyes immediately. 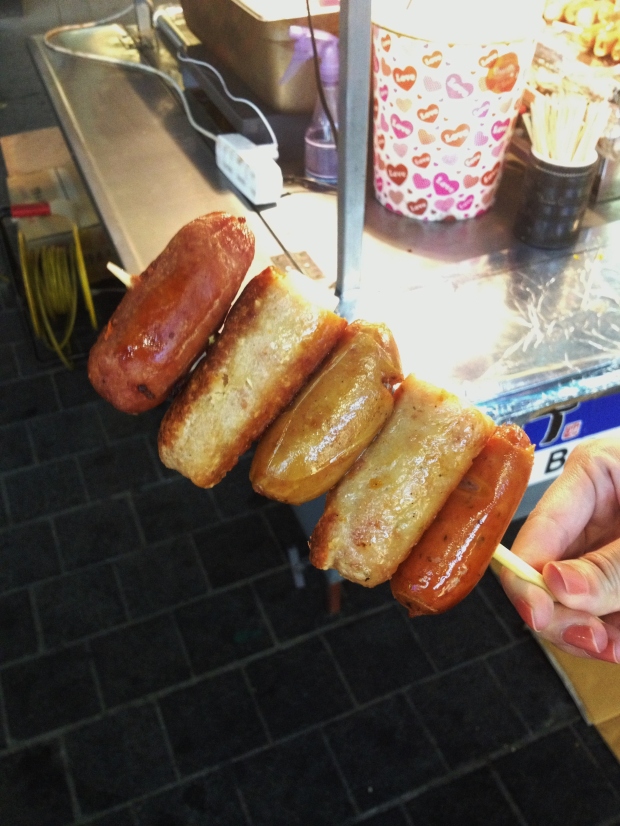 This sausage skewer isn’t your typical American sausage skewer. We had some spicy beef sausages, but there were also pork sausages that were filled with rice cake! I thought that was pretty neat! Yummy too! 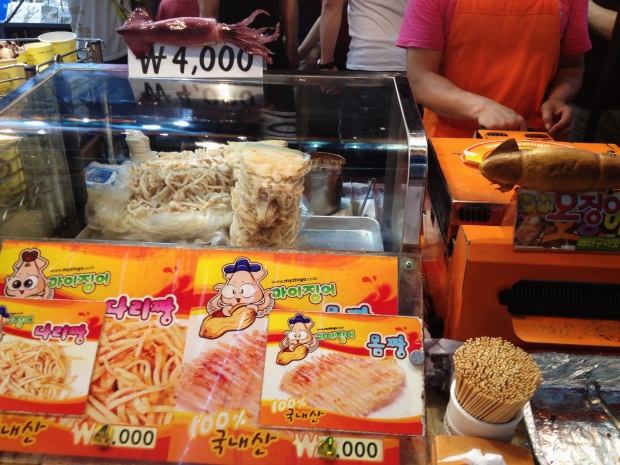 Another stall in Myeongdong offered a large variety of grilled squid, octopus, and fish. 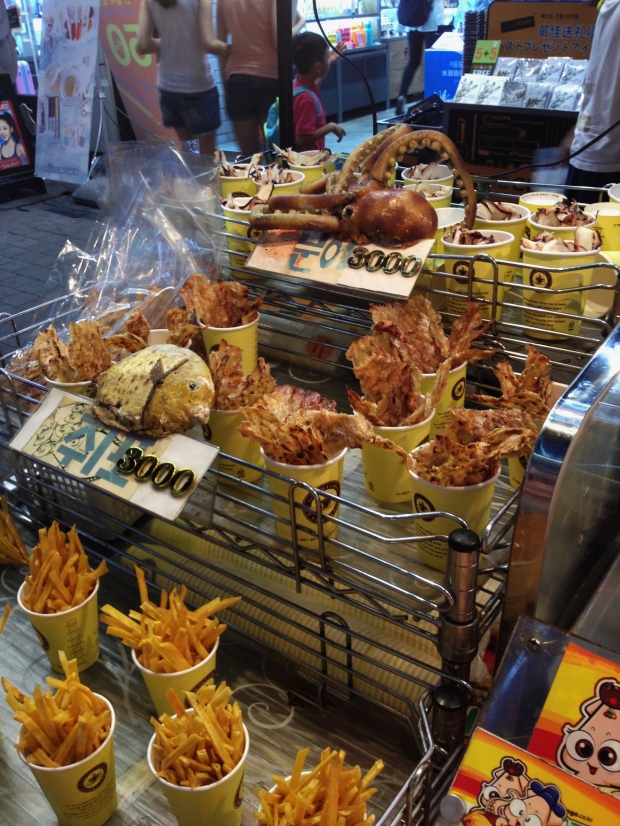 Some seemed to already be grilled, while others needed to be grilled.

We had originally wanted to get grilled squid, but we couldn’t really figure out what was written on the signs. I believe that we ended up ordering grilled octopus. They placed these slices on the grill right away for a few minutes to heat it up. Honestly, these were terrible! They were so hard and tough that I’m pretty sure I had a difficult time digesting it. Won’t recommend this! 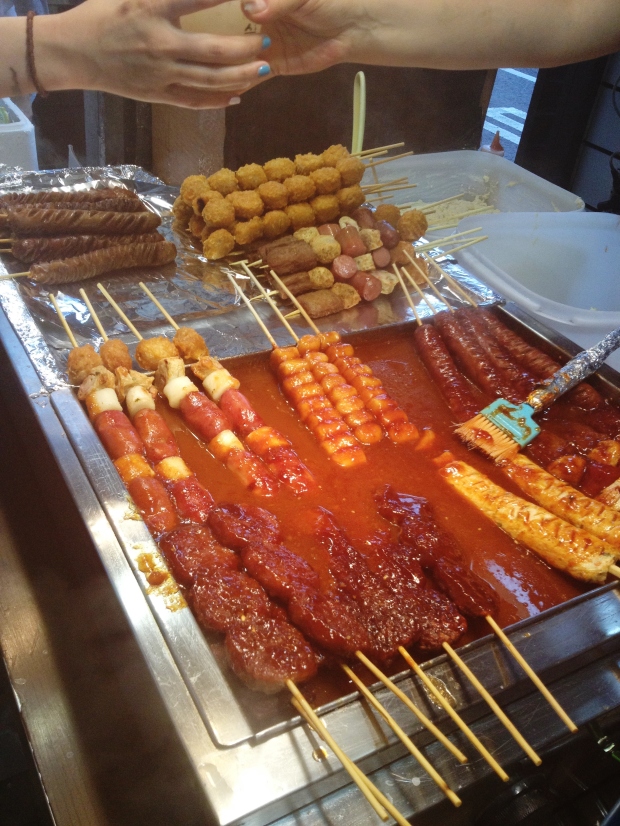 Another area with lots of street food is the Dongdaemun area which is filled with shopping malls like Doota and is filled with many wholesale shops. We found a stall with more sausage like skewers. These were dipped in a red sauce!

On the left is a fish cake wrapped around squid. To the right, I got a skewer with a variety of sausage, rice cake, fish cake, and meatballs. The sauce was not even very spicy. It was more sweet than spicy. Cheap and delicious! 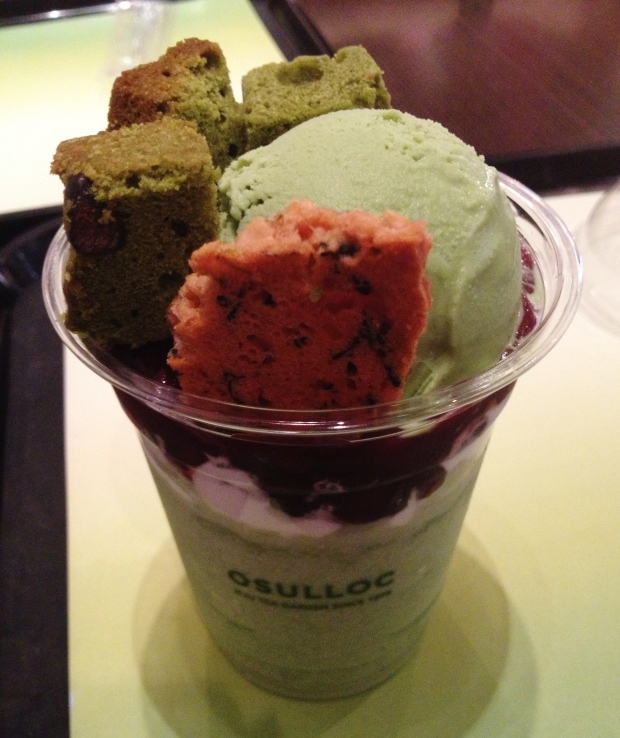 O’sulloc Tea House is a modern looking tea house that offers Korean traditional teas. It specializes in green tea, but also offers many other items like ice cream, desserts, and juices. They have several shops, but we stopped by the one in Myeongdong. I decided to share the Green Tea Parfait with K. The parfaits are quite expensive, at more than 8,000 won! Honestly, I didn’t think it was that good. The bottom was green tea ice topped with lots of whipped cream and red bean. It was then topped with a scoop of green tea ice cream, some green tea cake, and a tea biscuit. We found that the parfait just tasted like cream. I would’ve much preferred the parfaits at Mimibuloveme in Vancouver. I find that O’sulloc is overrated with high prices! I know they specialize in green tea, so I’m guessing their teas are probably more on the right track. Definitely not going back for the desserts though. 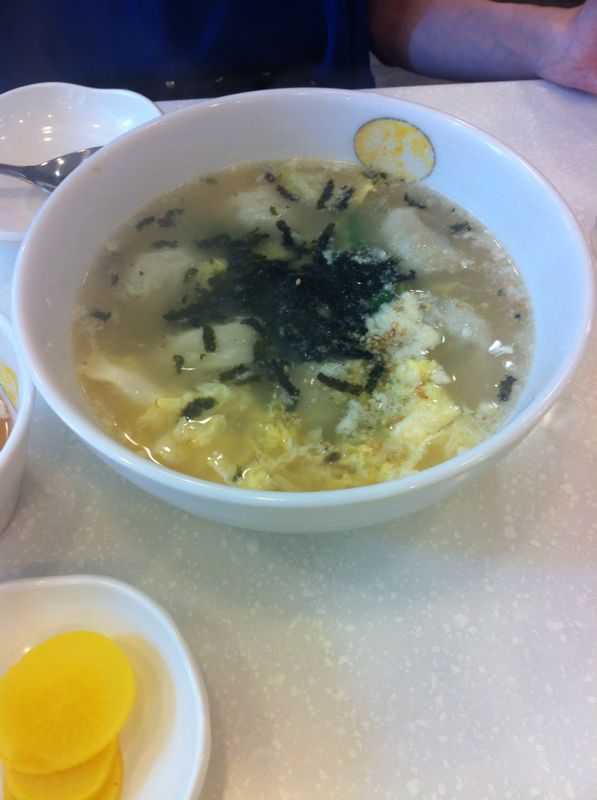 On another day, K and I went out early in the morning and walked over to Insadong to look for some quick breakfast. We ended up heading up to this random cafe on the second floor of a building. I never got the name, but it was filled with office people! It’s more like a fast food/ cafeteria type of setting but still with full service. I chose the Dumplings in Oxtail Soup, which was absolutely delicious! Filled with roughly 6 dumplings, and topped with onions, seaweed, and egg, the broth was the best part! It didn’t taste like MSG, but rather a hearty broth filled with flavour. As for the dumplings, they were pork and chive dumplings, and a great way to start the morning! Must try!

We also found Tteokbokki with Cheese on the menu and thought it would be quite interesting. Unfortunately, it was a bit of a disappointment. There wasn’t enough cheese on it! They definitely skimped out here. There were only a few strings of melted cheese, but not enough to create a cheesy effect. The rice cakes were soft, and sitting in a spicy hot pepper sauce, and topped with white sesame. It also came with half a hard boiled egg. Overall, these were just decent. I would highly recommend trying their soups instead, since most of the locals were ordering that.